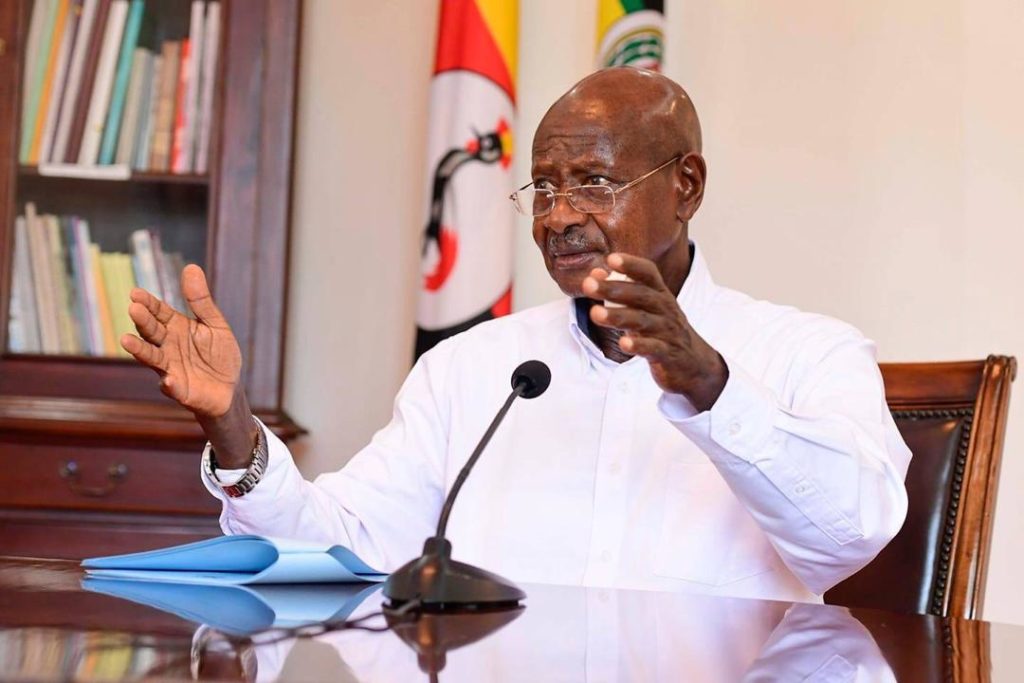 President Yoweri Kaguta Museveni has banned the movement of all Ugandans, driving private vehicles and ordered the closure of shops as part of the new measures to fight the spread of the deadly Coronavirus.

Given its spread methods ─ sneezing and coughing by an inconsiderate and careless person in a cluster of people bunched together as well as an individual’s own carelessness of touching the soft parts of your body (the eyes, the nose and the mouth) without washing your hands or sanitizing them first, after careful study, we decided that this virus will spread fastest if it gets into large concentrations of people, some of whom may be behaving inconsiderately or carelessly as stated above. We, therefore, adopted the strategy of dispersing any concentration that may provide fuel to this virus.

In my address of the 18th of March, 2020, I put out 13 actions that dealt with this problem, in part, as well as other associated matters. The 13 measures were:

(1) Close all the Educational Institutions which accounted for 15 million young Ugandans;

(2) Suspend communal prayers in Mosques, Churches or in Stadia and other open air venues;

(4) Banned Ugandans from moving to or through category one (I) countries that had had a large number of corona cases by that time;

(5) We allowed returning Ugandans provided they underwent mandatory quarantine, at their cost, for 14 days at a venue identified by the Ministry of Health;

(6) We allowed the non-agricultural gathering points to continue but with SOPs (Standard Operating Procedures) put out by the Ministry of Health; and these gathering points were: factories, hotels, large plantations, markets, taxi-parks, etc.;

(7) We discouraged the hexagonal, extravagant Ugandan-style weddings; if in a hurry, we encouraged the couples to go for the scientific weddings by the actual stakeholders, accompanied by a few people;

(8) Burials could not be postponed, but it should be for a few people ─ the concerned homestead;

(9) With the 33 million farmers, according to the 2014 census, there was no problem because they are dispersed in their farms, plantations, etc.; the only issues to deal with here were the monthly or weekly cattle auction markets (ebikomera); and obutare (food markets); these were suspended;

(10) At that time, we thought that we could continue with the public transport systems of buses, mini-buses, taxis, boda-bodas, etc., provided they were given SOPs;

(11) The discos, dances, bars, sports, music shows, cinemas and concerts were all suspended;

(12) Number 12 was hygiene and enlightened (not kikafiri behavior ) behaviours of not coughing or sneezing in public, no spitting, washing with soap and water or using sanitizers, regularly disinfecting surfaces such as tables, door handles, etc. and not touching your eyes, nose or mouth with contaminated and unwashed hands; and

(13) Ended with nutrition to strengthen the body defence system.

We quickly, however, learnt that some of the actors were not obeying these measures and that, for instance, the returnees from abroad, from the high risk countries, were escaping from the quarantine even when it was mandatory. The ones in self-quarantine were also escaping, e.g. the Chinese that were arrested on the Congo boarder, in Zombo or the returnee from Kisumu that is the father of the Iganga baby that turned up positive that went into hiding. These gaps could cause us serious problems.

These gaps were undermining the strategy of denying the virus the fuel that it could ignite and sustain its expansion by ensuring that there is no match-box and there is no dry grass ─ no virus and no concentrated masses. Therefore, on the 25th of March, 2020, on the 41st Anniversary of the battle of Rugaando, I announced two new measures:

In all these measures, we were careful to clearly state that cargo planes and cargo vehicles, within Uganda and between Uganda and the outside, should continue with only the crews for the air-crafts and 3 persons per cargo vehicle.

Then, on the 21st of March, 2020, we announced additional measures as follows:

(i) All public passenger transport vehicles are stopped and those were: taxis, coasters, buses, passenger trains, tuk-tuks (tri-cycles) and bodabodas;

However, private vehicles could continue but with only 3 people maximum per vehicle. However, ambulances, army vehicles, garbage collection vehicles, etc., would continue.

Since that time, we have been monitoring the situation. It was good we took all these measures. However, there are still windows through which the virus can continue to spread. As of today, the 30th of March, 2020, 31 Ugandans and 2 Chinese have been confirmed as being positive with the virus.

Almost all of them are imported cases by Ugandans returning from mainly Dubai (UAE), Europe, the USA and Afghanistan. Only 3 are the ones that received it from the importers. These are: the wife and daughter of the Masaka man and the baby from Iganga whose father had returned from Kisumu in Kenya.

This means that 14 out of the 33 had already entered the ekibuga (city, town), the lujja (compound) and some had even entered omuunju ─ munyuumba (inside the house) since we did not detect them at the Eireembo (the main entrance) or they escaped from the Eishaazi ─ the holding ground ─ by escaping from the quarantine. How many other Ugandans did they interact closely with to infect them? That is what we need to discover and soonest. It is good that those who start feeling the symptoms report themselves, like the case from Hoima did. However, this disease has two characteristics that make the work of fighting it tedious and quite challenging and need maximum vigilance.

One characteristic is that some of the infected people may not feel sick and may not even know that they are infected. Yet, they will continue spreading the disease, of course, through the carelessness of the general population of, for instance, polluting surfaces and touching oneself in the soft parts of one’s body: the eyes, the nose and the mouth; and sitting very close to one another even if the infected person is not coughing. After further careful analysis, we have come to the conclusion that to be on the safe side, it is better we err on the side of caution than to wait for a possible situation like of some countries where a 1,000 people are dying per day from this disease.

The second characteristic of this virus is that those that are infected, even when they survive, they take long in the hospital. In China, one case took 2 months. This has caused the filling up of all the hospital places even in the countries with advanced medical systems, until a situation where the medical authorities have to decide on who should be allowed to die and who should not.

Therefore, with these cases that had entered in the house, we should not wait for that situation. Incidentally, we now have under quarantine, a total of 839 persons. Even those that are alleged to have escaped from the quarantine, have all come back. How many people had they interacted with and how careless are they with the sitting close to one another and with the carelessly touching their soft parts? We, therefore, think that there is less risk in taking the risk of the bitter medicine of maximum restrictions for a limited time than gambling by assuming that pollution was limited when we are not absolutely sure. Since we started this campaign of sensitization, if everybody listened by not coughing and sneezing near other people, by not sitting too close to one another when the infected person has got no symptoms and by not carelessly touching oneself in the soft parts, the cases that entered into the house would not have spread the disease. The question, however, is: “Did all our people listen?”

That is why it is better not to take any risk by being complacent and assuming that everybody took heed when many may have not taken heed. That is why we have decided to take additional measures as follows:

The Government anti-Corona-virus actions of stopping public transport and other measures have put the drivers and other people out of work. Besides, many of them live hand to mouth ─ the daily bread. Without those activities, especially in the towns, such people may not be able to buy food.

The Government, after properly identifying these people will distribute food to them in the form of akahunga (maize flour), beans, powder milk, sugar, salt, etc. In the meantime, I direct the Police to arrest the opportunistic and irresponsible politicians who try to distribute food for cheap popularity. Those are very dangerous to the health of the people.

When you try to distribute food or money in such a situation, people gather around you. Many people can be infected in that process. You will, therefore, have caused the sickness or death of those people. Anybody involved in that effort will be arrested and charged with attempted murder.

Today, Mr. Elumelu sent me US$150,000. I will use it to buy, may be, three (3) four-wheel drive vehicles to use, by the Ministry of Health to use in this effort. Those trying to take patients to hospitals, must also stop because they spread the virus in the process.

However, the crucial point is the stopping of the epidemic. I do not want us to lose millions of our vulnerable people to this wholly avoidable epidemic just on account of indiscipline. What is the indiscipline?
Coughing or sneezing where there are other people; not washing or sanitizing your hands regularly; touching yourself in the soft parts of the body with unwashed hands, the soft parts being the eyes, the nose and the mouth; and congregating in numbers when science is telling us to avoid this wholly avoidable danger, disperse and do not congregate.

The other day, a Sheikh sent to me the verse from Isaiah, Chapter 26: Verse 20. It says: “Go home my people and lock your doors! Hide yourselves for a little while until the lord’s anger has passed”.