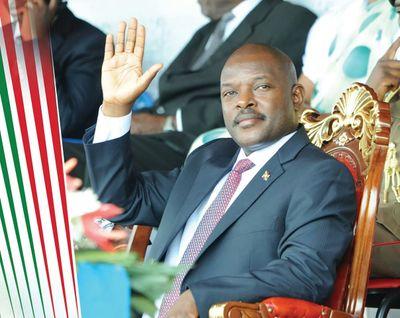 President Pierre Nkurunziza, who has ruled Burundi for over two decades, has shut down social media and the internet as Burundians vote for their next leader.

As you read this, Burundi is about to lose its president of 15 years and gain a “supreme guide to patriotism”, according to the official title that will be given to Pierre Nkurunziza once he steps down after Wednesday’s election.

He will also receive a $540,000 (£440,000) retirement pay-out and a luxury villa. But it is not clear if he is going to step out of the limelight and spend more of his time on other things, like his beloved football.

The build up to the poll – in which seven candidates are vying to replace the president – has been marred by violence and accusations that the vote will not be free and fair.

But whoever wins will be required by law to consult Mr Nkurunziza on matters of national security and national unity. It is however not clear whether they have to follow his advice  too.

Perhaps he could persuade them by pointing to his successes, such as introducing free primary school education, free medical treatment for mothers and children, and building new roads and hospitals.

Five years ago, Nkurunziza’s third term began amid political turmoil. His announcement that he would run for a further five years in power had sparked anger as some questioned its legality.

There was a failed coup attempt, hundreds of people died in clashes and tens of thousands fled the country. His election in July 2015, with nearly 70% of the vote, was described as a “joke” by opposition leader Agathon Rwasa, who boycotted the poll.

This time around, Mr Nkurunziza was allowed, after a change in the constitution, to run again, however he appears to have opted for a quieter life.

Wednesday’s election has also been criticised for taking place during the time of coronavirus.

The country has only recorded more than 40 cases of the virus, with one death, but the wisdom of holding mass rallies has been questioned.

A government spokesman said in March, when no cases had been recorded, that the country had been protected by God.

Burundi has resisted imposing tough restrictions, with the government only advising the population to stick to strict hygiene rules and avoiding crowds wherever possible – except of course in campaign rallies.

But the government did insist that foreign election observers be quarantined for 14 days from arrival in the country, which some saw as a way of discouraging them from going at all.

”What we’ve seen in the last few months is that the political space in Burundi is fairly limited,” Nelleke van de Walle, who works on Central Africa for the Crisis Group think-tank, told the BBC.

“So it’s highly questionable that the elections will be free and fair.

“The fact that no election observers will be allowed in the country to see what’s going on – I think that increases the risk for election fraud, corruption and human rights violations in the run-up to the elections as well.”

The government insists that it warned would-be observers about the quarantine in April, giving them ample notice. But diplomats have also expressed concern over the poll.