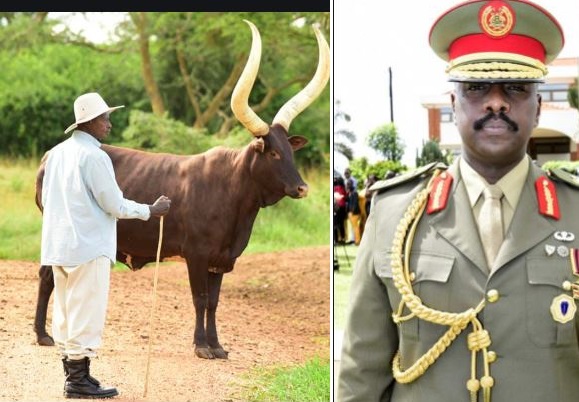 If you have been wondering why Ankole kingdom does not have a crowned Omugabe, then wonder no more, because they already have a king, called President Yoweri Kaguta Museveni.

The revelation was made on Tuesday  by First Son Lt. Gen. Muhoozi Kainerugaba, who tweeted on Tuesday that his father is one of the only  two  remaining Bachwezi in Uganda   and is the Last King of Ankole.

Gen. Muhoozi tweeted thus; “The last two ‘Bachwezi’ in history! My father and the last king of Nkore! Mzee Museveni and Afande Rubareza in 1981. Obote should have surrendered immediately! Nobody on earth can defeat ‘Bachwezi’.

However, what remains unclear is whether Gen. Muhoozi is not a ‘Mu Chwezi’ himself, simply because he claims his father Mzee Museveni is a Mu Chwezi which makes him (Muhoozi) a Mu Chwezi, since he is from the same roots as his father.

However, according to history, the last king of Ankole kingdom was Ntare VI (January 10, 1940 – October 14, 2011). Born John Patrick Barigye, was the Omugabe of Nkore or Ankole and the 27th of the Bahinda dynasty, although he did not rule over Ankole, since President Museveni was already ruling.

Barigye graduated in economics from Cambridge University in England in 1962 and  was later appointed Uganda’s ambassador to West Germany and the Vatican. Idi Amin, then president of Uganda, gave Barigye a job as an ambassador after Barigye and Barigye’s father publicly asked Amin not to restore the monarchy.