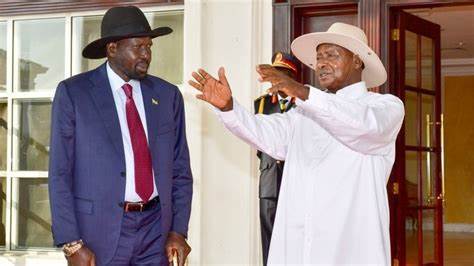 A few days earlier, before the Museveni warning, rumors circulated on the local media as well as some large international outlets including Al Jazeera alleging that South Sudan government had agreed to an Egyptian request for military base in the east of the country for a then possible military confrontation against Ethiopia over the GERD.

However, those reports later proven to be untrue after the government in Juba issued a statement dismissing the rumor and said “No agreement has been reached whatsoever to allocate a piece of land for Egyptian military in South Sudan territory.” It said that “Ethiopia and Egypt are close friends to South Sudan,” and that South Sudan can only play the role of a mediator in the matter of failure by the two countries to reach an agreement.

Speaking to Sudans Post this evening, a foreign ministry official said there were fears in the region that Egypt could use South Sudan as a launching pad for attacks against Ethiopia, triggering Ugandan President Museveni, long-time ally of the South Sudan government, to issue warning against siding with any of the two Nile basin countries.

The official said on June 9, President Museveni dispatched his son and senior presidential advisor, Major-General Muhoozi Kainerugaba, to South Sudan to deliver the Ugandan leader’s warning and that a meeting between Kiir, and Kainerugaba, attended by South Sudan’s spy chief General Akol Koor and Presidential Advisor on Security Tut Gatluak, was convened at Luri the following day.

“Well there was a warning from President Yoweri K. Museveni of Uganda that if Ethiopia and Egypt go to war, the government in Juba must stand neutral and must not give land to any of the two countries because this may spark a regional war in which South Sudan may be the eventual victim. That is why he send the presidential advisor General Muhoozi Kainerugaba to deliver Uganda’s position on any future eventualities between the two countries over the dam,” the senior diplomat said on condition of anonymity.

“When he arrived in Juba on teh 9 of June, he arrived in the evening and then a meeting between was convened in Luri because no one wanted to have the media having knowledge on the issue because the rumors parked by social media users that Egypt was given land had taken deep roots in the people,” the official added.