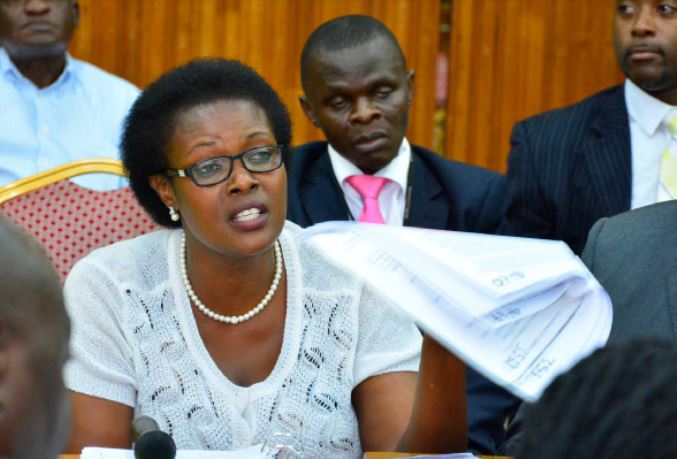 Margaret Muhanga, who is the Burahya Member of Parliament in Kabarole District and the Spokesperson for the National Resistance Movement (NRM) caucus,  has called upon the Parliamentary Disciplinary Committee to take action against Members of Parliament who reportedly leaked info that all NRM MPs received Shs40M last week.

News circulated last week that all NRM MPs who voted in favour of lifting the Presidential Term Limits in 2017 had received Sh40M from the NRM as a token of thanks for supporting the Party.

However, although some government officials came out and vehemently denied the allegations, many others, like Muhanga, have since confirmed to the nation that indeed the MPs received the money.

However, the trouble is that sharing the cash bonanza was meant to be a jealously guarded secret, although it somehow ended up leaking  to the media and has since sparked off a national scandal, especially after the same MPs were lambasted by the public for sharing Shs20m COVID-19 money each.

It is for that reason that  that Muhanga wants all NRM  MPs who leaked word about sharing the Shs40M be subjected to the Disciplinary Committee over breach of their oath for secrecy.

According to her, the problem isn’t sharing the money amongst themselves but how info got to the public.

It should however be recalled that Muhanga  has been at the centre of various corruption scandals.

For instance, a few years ago Muhanga raised eyebrows after she told Parliamentarians who were investigating how government officials acquired land belonging to UBC that she sold goats from her farm and raised Shs10Bn which enabled her to buy a plot of land in Bugolobi that belonged to the national broadcaster.