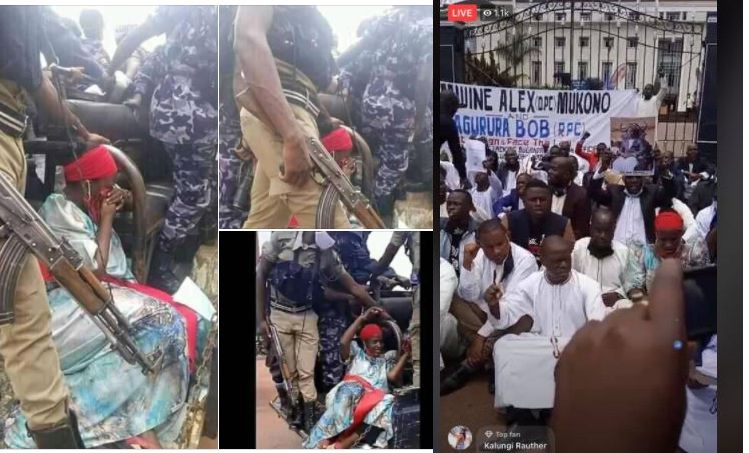 Kampala Woman Member of Parliament Nabilah Naggayi Ssempala and several other people were arrested on Tuesday for staging protests against what they termed as police brutality in Uganda.

Naggayi had led a group of protesters who included Kawempe North Councillor Muhamad Ssegirinya and others to Lubiri Mengo, where they had staged a sit-down strike outside the Kabaka’s palace at Bulange.

They were protesting against among others, the police’s acts of violently dispersing several members of the Mbogo Clan who had convened for a meeting over the weekend in Mityana District over the weekend, where they were teargassed and clobbered by the police as they dispersed them.

They were also expressing their dissatisfaction at government for failing to reign in on some senior police officers  they alleged were spearheading police brutality, among them RPC BOB Kagarura, the Mukono DPC Mwine Alex and others.

However, shortly after Naggayi, Ssegirinya and  others had started protesting outside Bulange, anti-riot police was heavily deployed to disperse the group.

During the ensuing chaos, Naggayi and several of her supporters were arrested and bundled onto police patrol trucks  before being driven to various police stations around Kampala.

Although the police faulted  the group for allegedly staging an illegal protest, by press time they were yet to issue a statement about the arrest.

Shortly after being released from police, Nabilah wrote on social media thus; “When will the men in uniform learn to respect humanity?
Self respect by definition is a confidence and pride in knowing that your behaviour is both honorable and dignified. When you harass or vilify someone, you not only disrespect them, but yourself also.
Street harassment, directed violence, harassment of humanity, impartiality, fake arrests are all acts committed by a person who in fact has no self respect.

-Respect yourself by respecting others.
We are not happy with the recent malicious acts of arresting our party members, unlawful arrests, and negligent throwing of tear gas to communities. This should stop…
Arresting and harassing me makes me stronger….
Am out of these people’s hands…”

It should be noted that Naggayi is contesting for  the Kampala Lord Mayoral seat in the 2021 election on National Unity Platform (NUP) ticket.