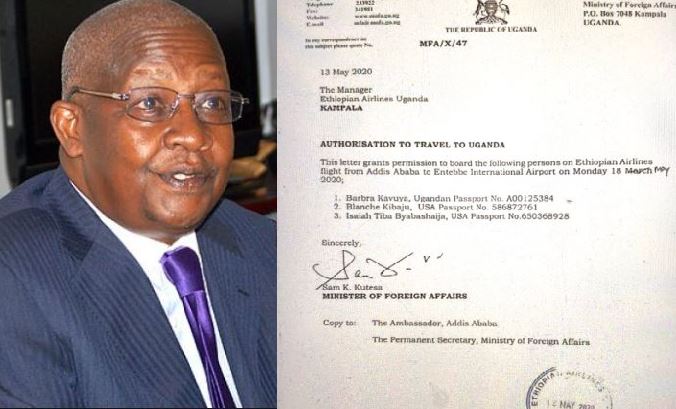 Sam Kahamba Kutesa, the Minister for Foreign Affairs, has come under fire for reportedly allowing city tycoon Ben Kavuya’s wife, daughter and grandson to fly into the country, despite the COVID-19 lockdown that President Yoweri Museveni announced last month, which saw a ban on all passenger flights in and outside Uganda.

The development comes after a letter purportedly written by Minister Kutesa permitting Kavuya’s wife Barbra Kavuya, daughter Blanche Kibaju and grandson Isaiah Tiba Byabashaija to fly into Uganda from the United States of America via Ethiopians Airlines, leaked to this website.

This letter grants permission to the board the following persons on Ethiopian Airlines flight from Addis Ababa to Entebbe International Airport on Monday 18th May, 2020;

The letter is copied to the Ugandan Ambassador in Addis Ababa, Ethiopia and the Permanent Secretary Ministry of Foreign Affairs.”

However, after reading the letter which has since gone viral on social media,  several Ugandans have not been amused by Kutesa’s actions and many of them have started ranting, accusing the Minister of being segregative.

This is because  there are thousands of Ugandans who are stranded in countries like China, USA, UK, Spain, Italy, UAE and others who have since been barred from traveling to Uganda ever since Museveni announced a lockdown at Entebbe Airport and suspended all passenger flights.

Meanwhile we have established that the National COVID-19 Task Force has since approved a private residence in Bugolobi, a leafy city suburb, as an isolation centre for Kavuya’s family.

A letter seen by this website dated  May 14th, 2020 National  by the Ministry of Health, indicates that the Task Force approved a residence at Legacy Courts apartments located on Plot 4 Younger Lane as a private isolation centre  for Kavuya’s family members, who are set to land into Uganda on Monday May 18th, 2020.