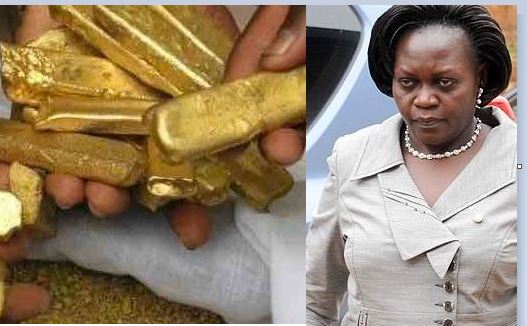 The Mafias that forced Tamale Mirundi from NBS TV are back again, this time hunting for the head of Sarah Opendi, the State Minister for Mineral Resources….

Hon. Opendi told Parliament on Thursday that she continues to receive death threats from anonymous people who she described as mafias promoting illegal gold mining in Uganda.

The Minister said that ever since she was appointed to the docket in January, after serving as a State Minister for Health in charge of General Duties, said that her mission was to clean the mining industry, but there are some people who are trying to frustrate her efforts.

She noted however that the threats will not frustrate her efforts against illegal mining activities and the violation of rights of other players.

Opendi told Parliament that; “Concerning the issue of the gold mines, my life has been threatened but I have assured these mafias that before they blow my head, I will have removed them.”

The Minister who in recent months has been traversing the different mining areas across the country was responding to a matter raised by Kalungu West MP, Mr Joseph Ssewungu, who said there might be deliberate efforts to fail her.

“The Minister of Energy may not be able to do much when people from one region are the ones manning the Minerals Protection Unit of the Uganda Police Force,” Ssewungu said.

Ssewungu read out the names of senior officers including the zonal commandants in the Minerals Protection Unit saying they all hail from western Uganda.

According to the MP, all the 20 senior officers in the unit are from western Uganda and this, he said may frustrate any effort aimed at streamlining the mining sector, especially if such efforts are deemed by the officers to be against their personal interests.

Opendi said she would not be in position to respond to the allegations although she has also heard about the composition of the Mineral Protection Unit being manned by people from one region.

“I request that you invite the Minister of Internal Affairs (Gen Jeje Odong) because these officers are deployed by the Uganda Police. Otherwise, I have also heard about them,” she said.

However, Speaker Rebecca Kadaga expressed dismay at the existence of a Mineral Protection Unit in the Uganda Police, saying it wouldn’t have been created without Parliament being informed first.

She has since summoned the Internal Affairs Minister Gen. Jeje Odong to address the House on the matter and explain how  this all came about.