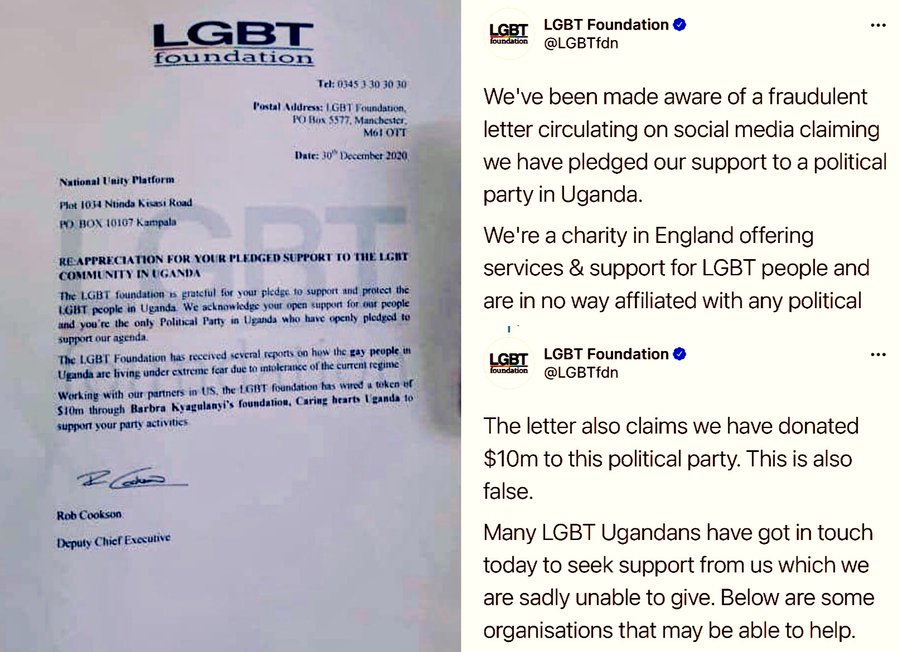 The LGBT Foundation has categorically denied donating $10 million to a political party in Uganda after a fraudulent letter was widely shared on social media.

The Manchester-based charity, which supports the LGBT+ community across the UK, was the subject of a bizarre letter circulated online claiming they had pledged support to the National Unity Platform (NUP), a Ugandan progressive political party.

The letter, shared on Twitter, was dated 30 December, 2020, and was written on paper with an LGBT Foundation letterhead.

In the fake letter, the LGBT Foundation “thanked” the National Unity Platform for its “pledge to support and protect the LGBT+ people in Uganda”.

“We acknowledge your open support for our people and you’re the only political party in Uganda who have openly pledged to support our agenda,” the letter reads.

“The LGBT Foundation has received several reports on how gay people in Uganda are living under extreme fear due to intolerance of the current regime.

“Working with our partners in the US, the LGBT Foundation has wired a token of $10m through Barbra Kyagulanyi’s foundation, Caring Hearts Uganda to support your party activists.”

The LGBT Foundation responded to the fraudulent letter on Twitter on Monday (4 January), saying they are “in no way affiliated with any political party”.

“We’ve been made aware of a fraudulent letter circulating on social media claiming we have pledged our support to a political party in Uganda,” the LGBT Foundation wrote on Twitter.

“We’re a charity in England offering services and support for LGBT+ people and are in no way affiliated with any political party.

“The letter also claims we have donated $10 million to this political party. This is also false. Many LGBT+ Ugandans have got in touch today to seek support from us which we are sadly unable to give.”

The charity finished by urging LGBT+ Ugandans who are struggling to instead contact Rainbow Railroad, an advocacy organisation that helps LGBT+ people flee violence and persecution, or the Kaleidoscope Trust, which advocates for equality across the world.

t is not yet clear where the fraudulent letter originated or why it was circulated. PinkNews has contacted the LGBT Foundation and the National Unity Platform in Uganda for comment.

Uganda is one of the most anti-LGBT+ countries worldwide. Same-sex sexual activity is strictly illegal, and queer people can face life in prison.