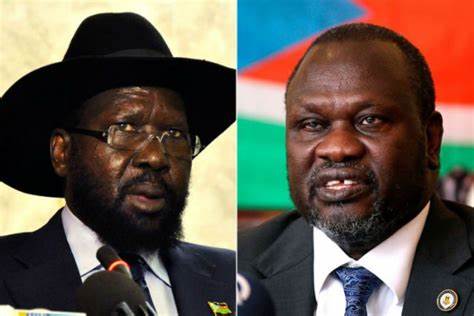 JUBA – South Sudanese citizens are calling on President Salva Kiir Mayardit and his first deputy, and SPLM-IO leader, Dr. Riek Machar Teny to work hard to end defections among their rank and file expressing fears that the practice may eventually bring down the agreement.

Kiir and Machar signed a revitalized version of a 2015 peace agreement in September 2018, but important provisions of that peace deal, such as the security arrangements which provides for reunification of the rival forces, have not been implemented.

Since Machar returned to Juba in February this year, defections have increased with senior political leaders loyal to Kiir and Machar switching sides, raising regional and international concerns over the fate of the already fragile peace agreement.

Public fears were triggered in September when a senior SPLA-IO commander in Central Equatoria state, who declared his allegiance to President Salva Kiir’s SSPDF, attacked SPLA-IO forces there a few days later.

Last week, a group of almost 80 Kiir-allied officials declared their intention to join Machar, accusing the ruling SPLM faction of corruption and reluctance to achieve peace and stabilize the country’s failing economy.

In an opinion poll conducted online this week by Sudans Post, several citizens expressed their discontent over the rising number of defections and the risks associated with it, urging the two leaders to avoid entertaining defections.

Poutur Par, a social media user, said the only way to end defection is for the parties to immediately implement Chapter 2 of the revitalized peace agreement, which is concerned with the reunification of forces.

He said most senior opposition commanders defect because of promises by the regime in Juba to offer them higher ranks, luxury and assignments. He said politicians in the government defects to the opposition to look for spaces which they don’t find given the large number of them in the government.

“The only way to end this phenomena is for the parties to go for full implementation of Charter 2 of the revitalized peace agreement. Once the armies are united, there will be no more defections for some officers defect from the opposition because of promise by the government to offer them higher ranks and assignments, and some defects because they lost hope in this peace thinking it would collapse again and this is a surrender,” he said.

“As for politicians, some of them shift allegiance because of spaces in their respective parties. For example, those defecting from the government’s side (SPLM IG) are defecting because they couldn’t find seats as there are many of them,” he added.

He further said that “When all government structures are formed, all these kinds of behaviors, or whatever, will stop. So, let us encourage our leaders to implement this peace agreement in letter and spirit to overcome all hardships such as economic downfall.”

Another social media user, Vincent Taban, said although the defection is not a new thing, it has become more alarming as of recent. He said this practice by senior opposition and government commanders as well as politicians, jeopardize the implementation of the revitalized peace agreement.

“To be honest, this phenomenon is not new, only that it has become significant lately among politicians, and unfortunately among the uniform services too. Impact on the R-ARCSS is obvious, it jeopardizes the entire process particularly chapter II on the permanent ceasefire and the transitional security arrangements. This is because most of the defected politicians and uniformed service officers turn in most of their shifting allegiance statements to blame and tarnish the images of their former organizations and at times declare enmity and animosities to their former colleagues,” Taban said.

“What should be clear for the uniformed service officers is that sooner or later, there is going to be reunification, restructuring, transformation and redeployment of all the forces in South Sudan. There is only going to be national armed forces and law enforcement units,” Taban added.

He expressed doubts as to whether President Salva Kiir Mayardit and opposition leader Dr. Riek Machar Teny can do something to bring this practice to an end, because, according to him, it is “unavoidable and unstoppable,” but said the two leaders should instead stop welcoming these defectors which he said may help decrease the level of defections among their loyalists.

Another social media user, Achuek Kuorwel, said the two principals “have no control over their forces.

Ketket Koang, a social media user based in Egypt said the two leaders need to urgently “build a higher bridge of trust between themselves for members of their parties to build trust and avoid defection.

Ruot Palatah Bakuony said “the current regime only buys time and is not in any position whatsoever to complete the implementation of the revitalized peace agreement for the sack of the suffering population of South Sudan.”