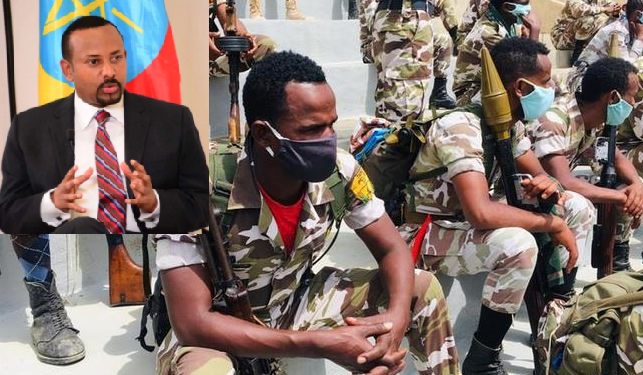 Abiy said federal troops had not killed a single civilian in their nearly month-long offensive against regional forces in Tigray.

He also assured Parliament on Monday that the army would not destroy Mekelle, capital of Tigray, after announcing its capture yesterday.

The Ethiopian government has been trying to quell a rebellion by the Tigray People’s Liberation Front (TPLF), a powerful ethnically based party that dominated the central government for nearly three decades until Abiy came to power in 2018.

Thousands of people are believed to have been killed since the fighting began, more than 43,000 have fled to neighbouring Sudan, and there are reports of armed groups attacking civilians.

“Every target has been signed and approved. The House [parliament] can see that. Every missile launched is backed by a signature of authority,” Abiy told lawmakers.

“Ninety-nine percent of them hit their targets and 99 percent of them didn’t have collateral damage. No country’s army can show this level of performance. Our army is disciplined and victorious,” he added.

Abiy also said that; “They said you will destroy Mekelle and so on. Mekelle is ours. It was built with our resources, we are not going to destroy it. Not even a single person was affected by the operation.”

However, there was no immediate response from the TPLF, which had accused the government of targeting civilians in air raids and ground fighting.

Claims from both sides are difficult to verify since phone and internet links to Tigray have been largely down and access has been tightly controlled.

However, media reports contend  that Abiy’s claim contradicts what some humanitarian groups have reported, because a recent report from the Red Cross says that in Mekelle, 80 percent of the people in hospitals have trauma injuries even though they don’t say how they got those trauma injuries. This came with a serious shortage of medical supplies and of body bags.

On Monday, Tigray leader Debretsion Gebremichael said his forces were still fighting near Mekelle, which fell to government troops after nearly a month of fighting.

“I’m close to Mekelle in Tigray fighting the invaders,” Debretsion told Reuters news agency in a text message, which the government dismissed as a deluded claim.

Abiy’s government launched an offensive on November 4 against the TPLF, accusing the former guerrilla movement of insurrection.

Federal forces announced that they had taken Mekelle, a highland city of 500,000 people, with relatively little resistance, although the TPLF said on Monday it had shot down a plane and retaken a town.

Debretsion, a 57-year-old former radio operator, also denied reports he had fled to South Sudan and said his forces had captured some soldiers from neighbouring Eritrea around Wukro, about 50km (30 miles) north of Mekelle.