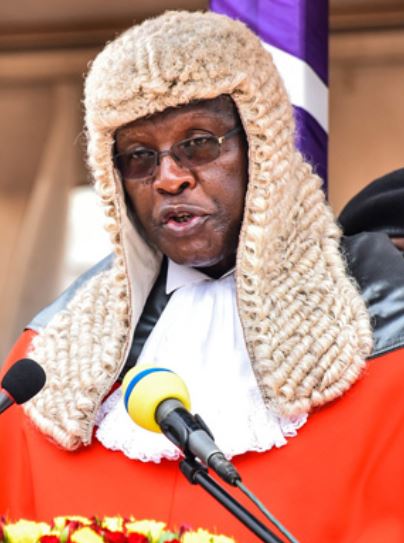 Hon. Justice Bart Katureebe on Friday June 19, 2020 retired from the position of Chief Justice following the expiry of his contract.

Justice Katureebe had served in the position since 2015 when he was appointed by President   Yoweri Museveni and despite having he capability and credibility to push on, he decided to seek another term in office.

A statement from the Judiciary about his retirement reads in part thus;

“I am retiring from Judicial Service as the Chief Justice of Uganda on June 20, 2020,” he said in a short letter of appreciation to stakeholders.

“I wish to take this opportunity to thank you all collectively and individually for the cooperation and support you have rendered to me, and the Judiciary as an institution during my tenure in office. It has indeed been a great honour and privilege to work with you all.

“I believe that together we have registered some achievements in the Administration of Justice in the Country. I would urge all to extend the same support to the in-coming Chief Justice,” said Justice Katureebe in his letter.

Occupying his seat for the last time in the Chief Justice Chambers at the Judiciary headquarters in Kampala, Justice Katureebe told some of his staff that: “I have retired and I’m going home. I want people to see that you can retire and go home. I am just winding up for the new person to come in.”

He added that; “I’ll be coming to Kampala as a visitor, and may be to the Supreme Court where I still have three months to finish my judgments. I also want to complete my book and I hope I can have the manuscript ready by December.”

He said since the President has not yet appointed his replacement, he would on Monday hand over the office to his deputy, Justice Alfonse Chigamoy Owiny-Dollo, who will serve in acting capacity, pending the appointment of a substantive chief justice.

“The Deputy Chief Justice (DO) will be acting from Sunday, because I technically leave on Saturday 20. June midnight. After that, I will not be able to sign anything as Chief Justice,” Justice Katureebe noted.

The Judiciary has organized a small symbolic handover ceremony on Monday (June 22).

A visibly contented Katureebe said to a few of his staff on Friday: “For me I am very happy with where we have reached — almost everything of mine has clicked. “

He said terms and conditions of Judicial Officers have improved and now put in law, so it is no longer ex-gratia (paid at will) and that judicial officers now have retirement benefits.

“When I joined the Judiciary (in 2005), judges were getting Shs5 million per month, but they are now getting an average of Shs25 million,” he said.

Justice Katureebe said he dedicated 36 years of his work life to public service: “I worked for eight years as a state attorney; then I was a minister for 13 years, including service in the Constituent Assembly and Parliament — 21 years in government, plus the 15 years in the Judiciary, inclusive of the five years as Chief Justice.”

He said he feels he has retired satisfied that some achievements have been made, but he acknowledges that a lot more still needs to be done, particularly in the reduction of case backlog.

Later in the afternoon, the Chief Justice was surprised and visibly moved by an impromptu birthday party organized by his staff at the Supreme Court on Friday afternoon, where he was presented with a birthday cake in his office.