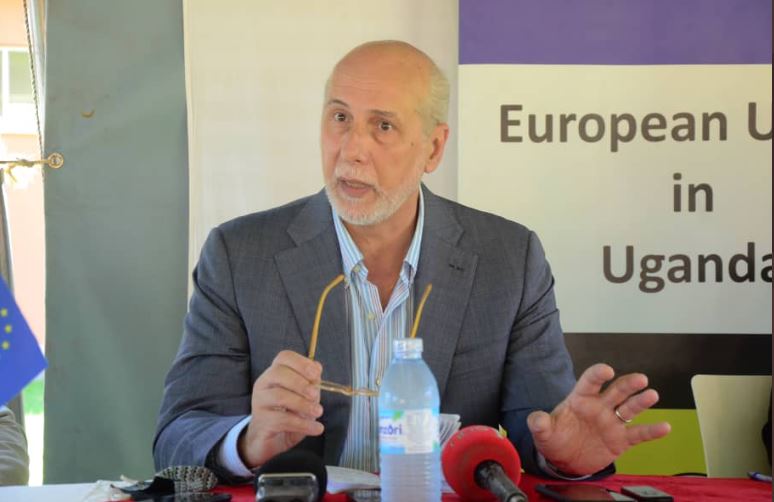 The Electoral Commission (EC), led by Justice Simon Byabakama, has without giving reason, refused invite Election Observers from the European Union ahead of the 2021 presidential election.

This was revealed Tuesday by the EU Ambassador to Uganda H.E Attilio Pacifici, who revealed that the Election  Observers from EU will not participate in the 2021 elections because up to now they  have not been invited by the E.C,  which hasn’t been the case in previous years.

Ambassador Pacifici said they need to have a specific invitation  so as to participate in the electoral process.

“Unlike in the past national polls where the Government formally wrote to the EU inviting them to participate as stakeholders in the electoral process, this time around we were not invited,” H.E Pacifici said.

He added that; “We need to have a specific invitation. We want to feel and know that the EU is welcome.”

He was speaking during a public debate held at Parliament on the Role of the media in promoting free and fair elections.

The debate, which was organised by the Uganda Parliamentary Press Association (UPPA), also doubled as a swearing-in ceremony for the new executive.

When contacted for a comment about the impasse, Paul Bukenya, the Acting E.C spokesperson, said the prerogative and mandate to invite election observers lies in the hands of the Commission.

Bukenya said a general invite was sent out through the Foreign Affairs Ministry to all the international observers interested in monitoring the 2021 general elections.

“I’m surprised to learn that the EU did not received their invite,” Bukenya said, and advised them to reach out to the Foreign Affairs Ministry like the other entities have done.

“We do not write specific letters. Our invitation to international bodies was channelled through the Foreign Affairs Ministry. We invited all regional and international bodies to take interest in the roadmap and apply for accreditation as observers and some members have done so,” Bukenya noted.

However, Pacifici acknowledged the efforts of the EC to send a general invite but argued that this does not serve well the purpose of the partnership between the EU and the Government of Uganda in promoting democracy.

“If you want people to come to your house, you have to send a specific invitation. This is not the kind of invitation that we can utilise to mobilise support,” Pacifici said.

During the last general polls in 2016, the EU report noted that the election fell short of the minimum international standards of a free and fair election.