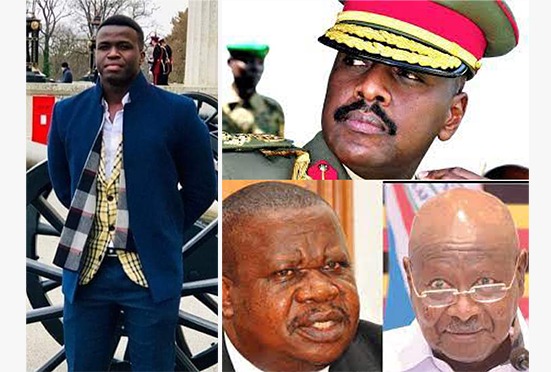 Ernesto Otafiire the son to the Uganda’s general Kahinda Otafiire from Mitoma district has expressed concern over Gen. Muhoozi kainerugaba over what he termed as not being humbled to the elders and advised him to remain calm and obedient to them so that can live longer and get chance to rule this country. He reminded him that their fathers are in the evening of their regime, its good to be humble Enersto Otafiire add.

‘’These generals are people you taunt will owe us nothing when our fathers are no more. When chasing us into exile ‘’ otafiire ‘s son Ernesto narrated. He went ahead advised his brother Muhoozi that this country that does not belong to them nor their fathers it was here before we came and we shall live it here so be humble.

This comes after ‘’Muhoozi said Otafiire could get same lessons from veteran opposition figure like Dr. kizza Besigye ‘’ finally my elder Kizza Besigye . he is my elder and I look forward to discussing with him on many issues may be he can teach Otafiire some of the lesions. Gen. Muhoozi said. After agreeing with Besigye that NRM is probably the most reactionary organization in the country. Gen. Otafiire and other several leaders have endorsed President Yoweri Kaguta Museveni for the 2026 coming general elections which could disintegrate Muhoozi’s bid for presidential elections