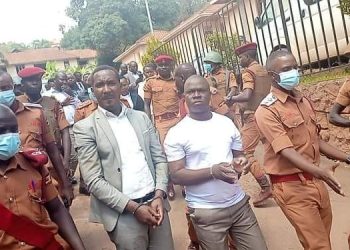 Kawempe North MP Muhammad Segirinya and his Makindye West counterpart Allan Ssewanyana might have to spend another 2 months in prison after their bail application was adjourned to February 20, 2023.

The MPs were expected in court today after court judge Alice Komuhangi Khaukha ordered the Uganda Prisons Services (UPS) to present them so as to enable them to sign some documents as required by their lawyers.

The two legislators are facing trial for several charges including murder, attempted murder, and aiding and abetting terrorism stemming from their alleged involvement in killings that took place in the district of Lwengo and Masaka between March and June 2021.

They pleaded not guilty to the charges and have for several months been pursuing their release on bail in vain. But as part of the process, their lawyers asked for access to the MPs through the courts to allow them to sign documents prepared for presentation before the Constitutional court. The documents include a petition challenging a move by the court to conceal the identity of some of the state witnesses.

The lawyers led by Samuel Muyizzi say that they cannot access the two incarcerated legislators following a decision to stop visitation in prisons to avoid the spread of the Ebola virus. In line with the request, justice Komuhangi asked UPS to let the accused persons sign the said documents while on the premises of the court.

However, today, in the absence of the presiding judge who is reported to be unwell, the duo virtually appeared before the court registrar Stella Beatrice Atingu. The registrar reported that they had not been brought before the court physically because the prison officials are trying to protect all inmates from getting Ebola.

Muyizzi who represented the duo in court says it’s unfortunate that they couldn’t access their clients but would continue with the pursuit of justice. The court was adjourned to February 20, 2023, for their bail application.