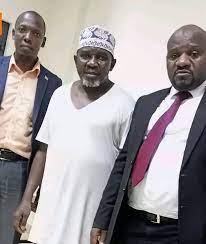 Sheikh Mwanje, who was arrested by unidentified gunmen driving in a drone on November 28 from Nakasero Mosque, was freed last evening a few hours after Members of Parliament under the Muslim Parliamentary Caucus demanded unconditional release.

The legislators condemned the illegal arrest of Muslim leaders and their continued detention without trial.

The Muslim MPs led by Asuman Basalirwa reportedly went and camped at CMI headquarters in Mbuya. The authorities allowed to release Sheikh Mwanje on bond.

Mwanje was arrested a week ago when he had gone to perform his daily prayers at Nakasero Mosque. He was blindfolded and pushed into a drone.

Defence and Army Spokesman, Brig Gen Felix Kulayigye confirmed his arrest saying he was under the CMI detention cells.

Sheikh Mwanje had previously been arrested in connection with the murder of Major Muhammad Kiggundu and his bodyguard Sgt. Steven Mukasa in Masanafu trading centre, Rubaga division in November 2016.

He stayed on remand until June 2019, when the International Crimes Division of the High Court granted him a non-cash bail of Shs20 million.