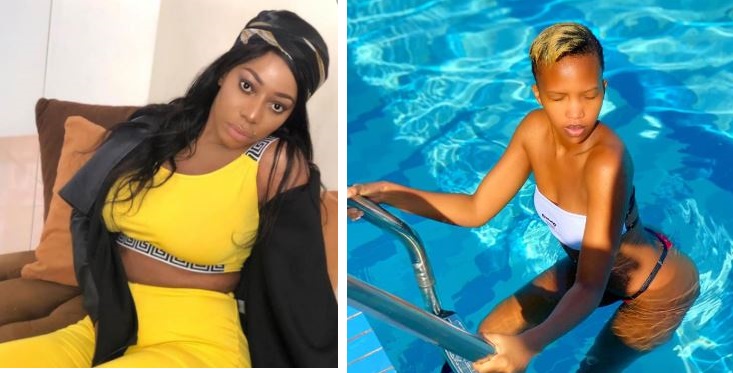 There is a bloody socialite war raging on between socialite Shanita Namuyimbwa aka Bad Black Queen Masolo and former TV star Sheilah Gashumba.

Apparently, Bad Black does not believe and cannot at any one time refer to Sheilah as an influencer or role model to any women and girls in Uganda.

Actually, Bad Black went as far as branding Sheila as a Back Stabber, among other nasty things.

“Who does Sheila influence? Simububi she influences them to do what? Drop out of school? Abort , date crooks, dress skimpy, social climb everyone? Abuse former employers? Backstab friends , What and who does she influence mbwa eyo,” Bad Black posted on her social media platforms.

She thereafter engaged in a bitter chat on Snapchat in which  they exchanged disparaging utterances against each other.

Just a few weeks ago, Sheilah Gashumba and Bad Black were merrymaking, hosting invite-only parties at which they confessed love and respect for each other.

However, currently, they are at each other’s necks as they open a can of worms against each other, exposing how they are living fake lives just to impress their followers on social media.

Sheilah then started exposing how God’s Plan has been feeding Bad Black and even took care of her hospital bills when she was sick. She also threatened to expose how fake and broke Bad Black is.

In retaliation, Bad Black unleashed her wrath in a barrage of words on Snapchat.

She started by emphasizing how being rich is not sexually transmitted, alleging that Sheilah has had numerous abortions yet she could be a mother of five with responsibilities by now.

Bad Black also assured Sheilah that God’s Plan didn’t give her money for free but rather to fight their online battles and that she doesn’t owe them anything now.

There is currently so much bad blood between Bad Black and Sheilah that the two can easily do bad things to each other!

Here below are some of their leaked Snapchats;