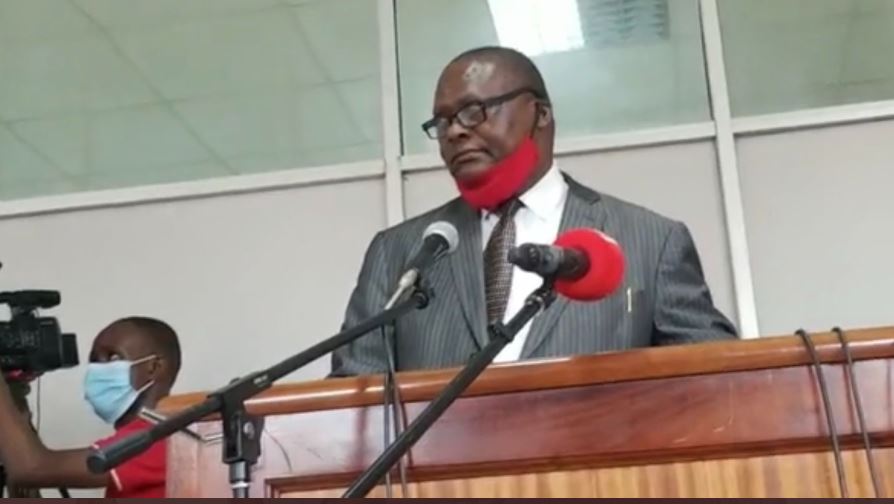 Moses Nkonge Kibalama, the former president of the National Unity Reconciliation and Development Party (NURP) which he later sold to Kyadondo East legislator Robert Kyagulanyi aka Bobi Wine, who changed its name to the National Unity Platform, has begged court to help him regain his freedom.

Kibalama, who appeared before High Court Judge Musa Sekaana for cross-examination on Friday, answered to the affirmative when asked by Bobi Wine’s lawyer Medard Ssegona Lubega if he wished court would help him regain his freedom that indeed he prayed so.

The petitioners, also demanded  that the Electoral Commission (EC) should stop recognising NUP, degazette it and refrain from nominating NUP candidates for any political position.

“Our former Party President, Mr. Nkonge Kibalama just confirmed to court that he’s been under detention for two weeks. He’s asked court to help him regain his freedom. He says he was summoned by Gen. Muhoozi, the CDF who quizzed him about changes in party leadership!” Bobi Wine tweeted during the court hearing.

He added that; “Kibalama reveals he has been at his residence in Mbale under security protection. He says he did not apply for the security.”

However, Kibalama, who last week appeared in  a video circulated on social media asserting that Bobi Wine promised to pay him  USD5M in exchange for relinquishing his party to him, denied the same allegations in court.

When asked by Ssegona whether he sold his party to Bobi Wine at USD5M, Kibalama answered that; “No sir, parties are never sold. You can’t sell a party. There’s no supermarket of parties.”

Speaking to reporters at the Uganda Media Centre in Kampala, Brig. Flavia Byekwaso, the spokesperson of the UPDF said that whereas it’s true that other security agencies are holding Kibalama for his own safety, she declined to name who were holding him. She also made it clear that UPDF is not involved in the operation.

Byekwaso added however, that whoever was holding Kibalama was holding him for a good reason because security received credible intelligence information that there were some people who wanted to harm him.

“The presence of soldiers, the police and others at his premises I know is for a good reason. From what I picked there were intelligence reports that indicated threats to his life and planned violence to his premises. So these are security guards protecting his premises,” said Byewkaso.

It had ealier on been reported that soldiers had surrounded Kibalama’s home found in Nansana municipality in Wakiso district and had taken him to an unknown location with his known cellphone switched off.

Byekwaso, who refused to disclose the actual nature of the threat on Kibalama’s life, said that the security was holding Kibalama in order to give him maximum security.

“Don’t ask me why because everybody knows how to do their work. The security depends on the gravity of the threat, if in their assessment the threat required them to remove him and put him somewhere to give him maximum security, that is what is going on,” said Byekwaso.

Watch this space for more details about this saga.