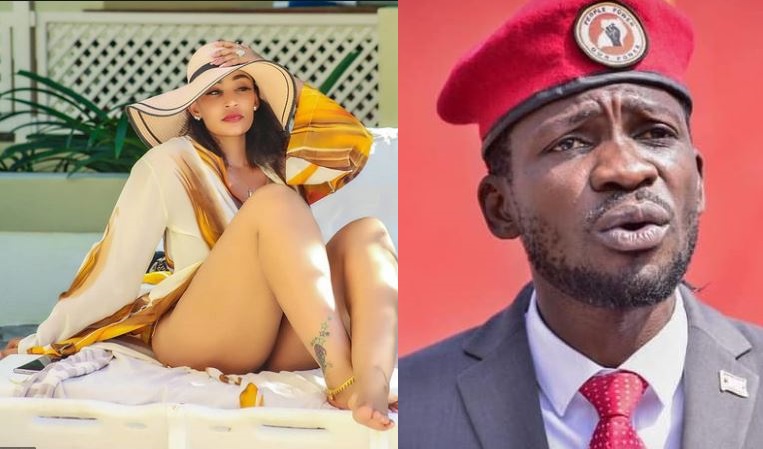 Socialite  Zari Hassan, who is late Don Ivan Ssemwanga’s widow and Tanzanian singer Diamond Platnumz’s baby daddy, is cursing why she ever opened her mouth to speak against 2021 presidential aspirant Robert Kyagulanyi aka Bobi Wine, the Kyadondo Municipality legislator.

As you read this, Zari is currently being bombarded to marrow with all sorts of insults and verbal artillery, after she revealed publicly that she does not support Bobi Wine and doesn’t believe he has what it takes to be president.

It all started over the weekend when Zari posted a video on her social media platforms, in which she  questioned the People Power movement leader’s potential to run for Presidency.

However, ever since she posted the video till to date, Zari is has become a victim of cyber-attack and bullying after several People Power supporters coming out to attack her using all sorts of vile words.

For instance, former music promoter Suudi Lukwago aka Suudiman wrote thus; “In my last post, I had promised not to talk about Zari. But as the next minister of International affairs in People Power government, I’ve chosen to speak about a video I saw when Zari abused all Ugandans working abroad. She said they were idle and  living on handouts. Let me make it clear. As Zari, since your husband passed away, what have you done to add a brick on the economy of Uganda? Have you put up any structure or added anything in the past four years?  There’s nothing. The Range Rovers you brag about can feed 1000 destitute Basoga where you hail from.  The Ugandans abroad who you’re insulting are sending remittances which are sustaining the economy.  All you are contributing to the economy is negative. You sleep with policy makers and steal from them to buy Range Rovers in South Africa. How does that help us?”

He added that; “Don’t abuse us the Indigenous Ugandans who bear the brunt of a failed economy. We are frustrated. People Power is our only hope. The scientific elections you are bringing are a hoax. Eat your bribe in silence. Sleep with inconsequential people for as long as you want but I beg..Never Never insult the average Ugandan who sees his hope in Bobi Wine. Suudiman”

However, on his part, Hon. Mohammed Nsereko, who is the Kampala Central Member of Parliament, doesn’t seem to agree with those attacking Zari and according to him, she has her freedom of speech and expression.

In her defence, he wrote thus on social media; “Freedom of speech is a right. You cannot insult ZARI HASSAN for speaking her mind and then you rise up to say you’re fighting for human rights. All those insulting her are enemies of democracy and political cowards. You argue your case without insulting Zari the bosslady. #MutujekoAkajanja.”