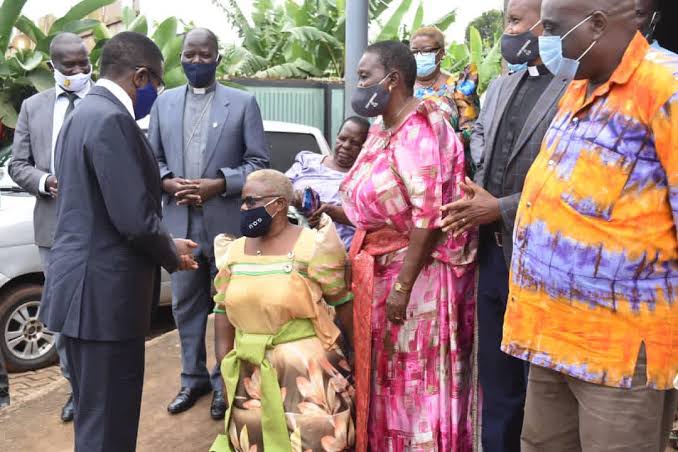 Buganda’s premier Charles Peter Mayiga on Saturday faced it rough, after a group of youth connived, with some politicians in Mukono, to deny him to talk to the congregation that gathered at the fallen Alex Benjamin Kigongo’s Vigil, at Nekoyede village in Nakifuma Mukono district.

The function started normally at 10 am, with a thanksgiving mass led by the Mukono diocese Bishop James William Ssebagala, after the mass, speeches from all invited guests started and the public address was in its normal state.

Drama ensued immediately when the Katikiro of Buganda started addressing the congregation and the public system went off, Mayiga had to wait for over 15 minutes as the system was being rectified but in vain.

Today the family of the late sekiboobo Alex Benjamin Kigongo led by Sarah Kigongo, cleared the air in regards to what has been circulating on social media, that Charles Mayiga was denied to speak on the Vigil.

“It was just a simple breakdown of the public address system, and it was not intentional as some people have been saying on social media, as a family we distance ourselves from such baseless rumors” Sarah Kigongo Said.

Steve Ssewanonda who was the chairman organising committee, refuted the allegations,” there was no big deal on the matter only that some people want showbiz where it’s not necessary”  Ssewanonda reported.

“These youth on social media are cheaply paid by some politicians to abuse everyone including the Katikiro Peter Mayiga but very soon i’m going to expose those politicians so that we isolate them” Elijah warned.

Ever since Kabaka got sick, a number of people have gone on social media, abusing Katikiro and demanding that Kabaka should be taken abroad for treatment, due to his worsening health situation.