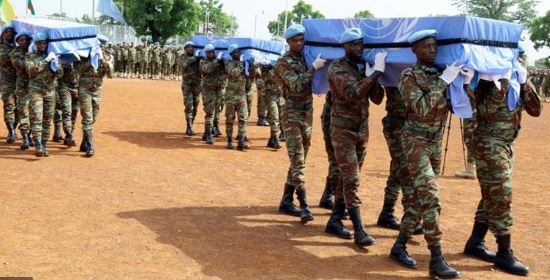 At least three United Nations soldiers from Chad are believed to have died in Mali  after their convoy hit a roadside bomb, according to officials.

The blast in the northern region of Aguelhok left four more soldiers seriously wounded, the UN peacekeeping mission in Mali, known as MINUSMA, said in a statement on Sunday.

“We will have to make every effort to identify and apprehend those responsible for these terrorist acts so that they can be brought to justice,” said Mahamat Saleh Annadif, MINUSMA mission head.

“I bow before the remains of these brave Blue Helmets who died in the service of peace in Mali,” he added.

UN Secretary-General Antonio Guterres also condemned what he described as a “cowardly” attack.

Guterres called upon the authorities in Mali to spare no effort to identify those responsible “so that they can be brought to justice swiftly”, according to his spokesman Stephane Dujarric.

Established in 2013, the UN peacekeeping mission in Mali has some 13,000 troops, drawn from several nations, deployed across the vast semi-arid country that has been facing a worsening security situation in recent years.

What began as a localised revolt in Mali’s north in 2012 soon spread to the centre of the country and then to neighbouring Niger and Burkina Faso.

The UN peacekeeping force, a French military intervention and military campaigns by national armies have failed to stem the violence, which has so far killed over 4,000 people in the three countries and displaced hundreds of thousands, according to UN figures.

The conflict has exacerbated ethnic tensions and local grievances over poverty and the absence of the state, giving rise to ethnic militias and bolstering support for armed groups, some of which are linked to the al-Qaeda and ISIL (ISIS) armed groups.