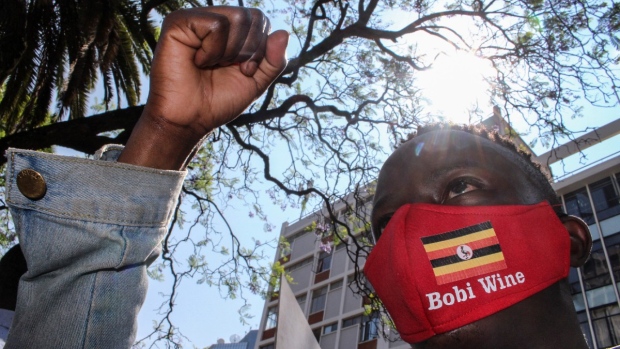 The opposition presidential candidate was arrested while campaigning in Kalangala in the country’s central region.

Uganda opposition presidential candidate Robert Kyagulanyi, popularly known as Bobi Wine, and his campaign team have been arrested in Kalangala in the country’s central region, he said in a post on Twitter.

The arrests on Wednesday spurred protests at a field in Kalangala Island in Lake Victoria where a helicopter was parked and which Wine’s supporters said they believed would be used to fly him back to the capital Kampala.

Police fired tear gas at the crowd who were protesting.

“They are firing even now to disperse people gathering on roads,” a witness, who did not want to give his name for security reasons, told Reuters news agency.

Wine has emerged as the strongest challenger to President Yoweri Museveni, 76, in the presidential election on January 14.

Joel Senyonyi, spokesman for Wine’s National Unity Platform party, said: “Yes police has arrested him together with his whole campaign team. They (police) put them in police trucks and started driving but we don’t know where they are taking them.”

Police dismissed reports of the arrests, and said they had CCTV footage of his supporters deflating tyres of police motor vehicles, inciting violence and obstructing officers on duty.

“The candidate was restrained for continuously holding massive rallies amidst the increased threats of coronavirus, in total disregard of the electoral commission and Ministry of Health guidelines,” police said on their Facebook page. “He’s being transferred to his home in Magere, Kampala.”

Photographs from the scene showed Wine being escorted by at least 10 police officers, some armed with rifles.

Wine was wearing a helmet and bulletproof vest, which he has said he uses to prevent injuries whenever police disperse his meetings.

Police at the time said they had arrested nearly 600 people and accused protesters of rioting and looting.