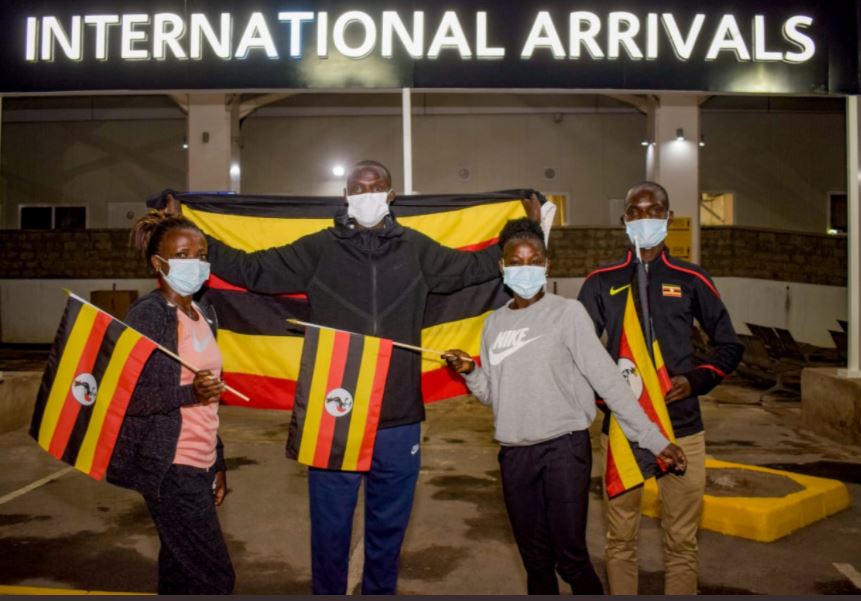 Uganda’s celebrated athlete Joshua Cheptegei was given a heroic welcome following his return from Monaco, France, where he won a gold medal.

Cheptegei, who set a new 5,000M World Record, was welcomed at Nairobi on Sunday morning Airport by a few of his family members, plus some officials from the Uganda High Commission in Nairobi, Kenya.

He is on his way back home after breaking the 5000m World Record in Monaco, France.

Among the first people to congratulate Cheptegei was President Yoweri Museveni, who tweeted that; “Yoweri K Museveni @KagutaMuseveni Congratulations to @joshuacheptege1 who has set a new 5,000m world record at the #MonacoDL. You have brought honour, pride and joy to your country. Well done!”

Cheptegei, the 2019 World 10,000m champion who reportedly needed 80 hours to travel from Uganda for the Diamond League meet, took 1.99 seconds off Ethiopian legend Kenenisa Bekele‘s world record from 2004. Bekele is also the 10,000m world-record holder and the second-fastest marathoner in history.

“It took a lot of mind setting to keep being motivated this year because so many people are staying at home, but you have to stay motivated,” Cheptegei said, according to organizers. “I pushed myself, I had the right staff with me, the right coach.”

Cheptegei, 23, came into Monaco as the 73rd-fastest man in history with a personal best of 12:57.41. But he declared before the meet that the world record was his goal, given he had no Olympics or world championships to peak for this year.

“It is very difficult to run any world record,” was posted on the Instagram of Bekele, who is part of the NN Running Team with Cheptegei. “Congratulations to my teammate [Cheptegei].”