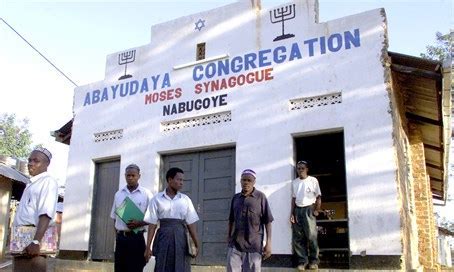 The small Jewish community in Uganda is trying to make its voice heard and get greater recognition as a fully-fledged member of the Zionist global family.

It is not often that new Jewish communities are added to the global Zionist fraternity, but it appears possible that this is precisely what will happen next month for the small but flourishing Jewish community of Uganda.

Because the Abayudaya community in Uganda has formally applied to form a Zionist Federation within the World Zionist Organization and a decision on their application is set to be decided by the Zionist General Council of the WZO next month.

The Abayudaya community, numbering between 2,000 to 3,000, adopted Judaism in the early 20th century, after their leader, having been exposed to the Hebrew Bible and the New Testament by Christian missionaries, chose to be Jewish.
Most members formally converted through the US Conservative movement between 2002 and 2010, and were recognized as a Jewish community by the Jewish Agency in 2010, although some underwent Orthodox conversion.

The lack of recognition has created problems for the Abayudaya Jewish community, particularly in traveling to Israel to visit, study, participate in Birthright and Masa programs, and for the purposes of aliyah.

The Zionist organizations in the Abayudaya Jewish community that have applied to form the Zionist Federation include the World Confederation of General Zionists, Marom-Uganda of the Conservative Movement, and the Herut Zionist faction.

Avram Mukibi, a community activist living in Mbale in eastern Uganda where most of the Abayudaya community lives, says that the lack of formal standing within the WZO has created difficulties both with its relations with Israel and in Uganda itself.

“We need to raise our voice internationally, and the formation of a Zionist Federation will give our community formal standing in the Jewish world,” Mukibi, 33, told The Jerusalem Post.

“Approval for the Zionist Federation in Uganda would create an umbrella body to support and help [the] Jewish community with its Zionist activities, help young people learn about Israel, visit the country and study there, and make aliyah if they want, as well as helping get rights in Uganda.”

Jesse Sultanik, chairman of the World Confederation of General Zionists, said that he met Avram in Israel at a Jewish Agency event and began discussing the options to bolster the standing of the community in the Zionist world.

“We connected further about what opportunities for collaboration there may be between the Confederation and the Ugandan Jewish community. That led to the idea of the Zionist groups in Uganda applying to become an official Zionist federation,” explained Sultanik

Rabbi Dov Lipman, who has consulted for the World Confederation of General Zionists, says he expects the Zionist General Council of the WZC to approve the Abayudaya’s application.

“I fully expect the Zionist General Council to enthusiastically vote in favor and embrace these passionate Zionists as full members of the WZO family,” said Lipman.

“This could be the greatest accomplishment and a wonderful badge of pride for the WZO during this challenging year.”
David Breakstone, deputy chairman of the Jewish Agency, said that forming a new Zionist Federation, would make the Abayudaya community formally part of the Zionist world, grant them delegates in the World Zionist Congress, have their voice heard, and benefit from WZO programs and participate in its institutions.

He noted however that WZO delegates from the Abayudaya community could struggle to even enter the country, given the lack of recognition for them by the Interior Ministry and the problems members of the community could have to even gain entry to the country.

David Yaari, Vice chairman of the Confederation of General Zionists said that one of the biggest challenges which must be addressed in the upcoming World Zionist Congress next month is strengthening ties between Israel and Diaspora communities, and “to more significantly involve our natural partners  in the world Federations.”

So-called emerging communities like the Abayudaya have become a thorny issue for the state, as several groups in Africa and Latin America claiming affinity to, or to be descendants from, the Jewish people, as well as large groups of converts, have become more prominent in recent years.

The Interior Ministry is concerned about the abuse of conversion, and mass claims of Jewish ancestry, for the purposes of immigration to Israel in poor, developing countries.