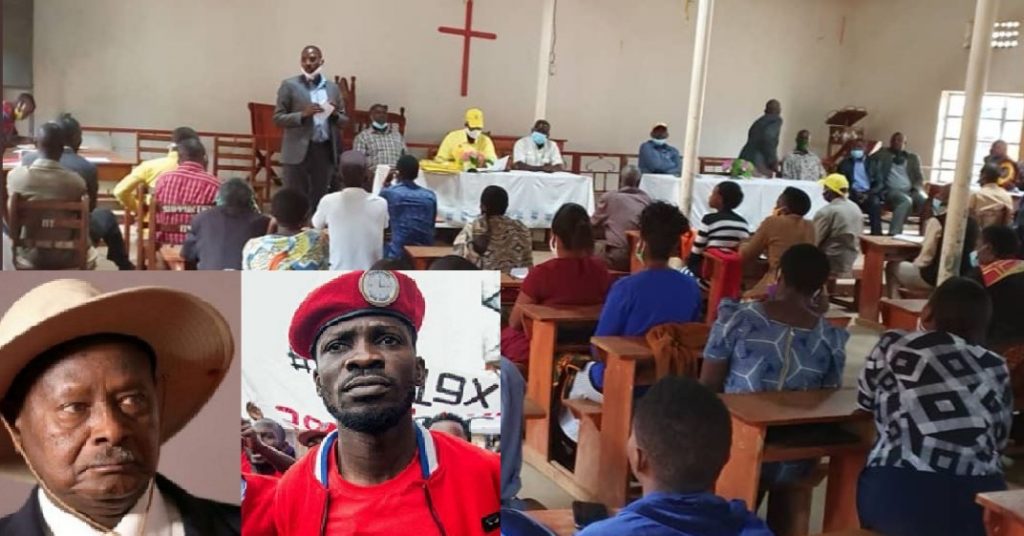 Uganda is risking yet another tragic outbreak of the deadly Coronavirus (COVID-19) pandemic after several National Resistance Movement (NRM) stalwarts have since decided to turn churches into venues to political campaigns, despite the suspension of public gatherings by President Yoweri Museveni.

Concerned Ugandans, among them People Power leader and 2021 Presidential contender, Robert Kyagulanyi aka Bobi Wine, Sarah Bireete and others  contend that a number of NRM bigwigs are conducting political campaigns in churches, despite the fact that President Museveni and the Ministry of Health closed all churches, mosques and other places where people gather for prayers.

The closure of such places, which was announced in March, was aimed at creating social distance and to avoid huge gatherings, because President Museveni said this would be one of the ways to prevent the spread of Coronavirus.

However, while the priests, sheikhs and pastors languish in idleness and poverty, the politicians are busy using the houses of God as political grounds.

One of the top NRM cadres spearheading this deplorable act, according to concerned Ugandans, is Minister for Justice and Constitutional Affairs Prof. Ephraim Kamuntu.

Bireete tweeted that; “Prof Kamuntu – the political supervisor of @UgandaEc was seen last week abusing both presidential directives on COVID19 & #RevisedElectoralRoadMap by engaging in public campaigns. @PoliceUg did nothing about it. Are the guidelines only for arresting opposition #UgandaDecides2021.”

Bobi Wine tweeted a video of NRM politicians conducting political campaigns in a church in Mbale District and accompanied it with  the caption; “The Museveni regime makes past despots look like amateurs! After banning all church meetings & political meetings on account of #COVID, Museveni’s campaign agents are using church buildings to hold political meetings to campaign for him. We shan’t relent until all of us are equal.”

Social media is awash with pictures of Minister Kamuntu taken over the weekend during a rally he had reportedly held at a church in Sheema District, which was attended by a huge gathering of people, many of who were not social distancing.

What is even worse is that most of the people  who attend these church rallies do not wear face masks and those who have them don’t wear them as advised by the Ministry of Health or President  Museveni, yet these are meant prevent the spread of COVID-19.

However, by the time of filing this story, neither Prof. Kamuntu nor the NRM Secretary General Justine Kasule Lumumba had issued a statement about the matter, not even the police or COVID-19 National Taskforce.