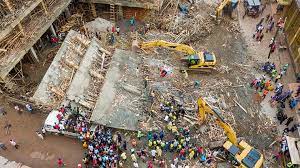 Three people were killed on Sunday when a building under construction in Kampala collapsed during a heavy rainstorm, but two children were pulled alive from the rubble, the Uganda Red Cross said
Images posted on social media showed construction workers and passers-by digging through debris with their bare hands and firefighters using cutting equipment to saw through buckled metal in a bid to reach people feared trapped
Red Cross spokeswoman Irene Nakasiita said three bodies had been pulled from the rubble of the four-store building, while two girls aged five and nine had been rescued alive and taken to Kampala’s main hospital
The building is next to the usually crowded Kisenyi Bus Terminal, a key transit hub in the Ugandan capital.
Nakasiita said there were fears that motorcycle taxi riders and others may have sought shelter from the rain in the building and could be buried under the collapsed structure.
Rescue workers were still combing through the site as night fell, using two excavators. “The search and rescue continues,” Nakasiita said.
According to witnesses several people including builders, drivers, food vendors and bystanders are all trapped inside the building. Several people rushed with all kinds of tools including axes, hoes and hammers to try and rescue the victims trapped under the rubble.
The police fire and rescue teams have also joined the search for the victims. Police and the army are maintaining security at the site of the collapsed building as rescue efforts are ongoing.
Salim Uhuru, the Kampala central Mayor, one of the first responders at the site, says that more than 50 people could be trapped under the rubble. According to Uhuru, the affected building belongs to the proprietor of Haruna Towers.
Police spokesman Luke Owoyesigyire said the collapse of the building had covered “vehicles, motorcycles and workers” but that the number of people trapped had not yet been established.
Construction site accidents are common in Uganda, where health and safety regulations are lax.