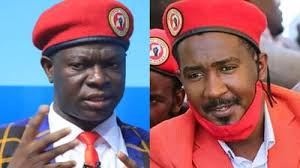 Police say they have intelligence that two opposition National Unity Platform (NUP) party Members of Parliament, Allan Sewanyana and Muhammed Segirinya allegedly commanded the gruesome murders in the greater Masaka region.
While addressing journalists at Naguru police headquarters police spokesperson Fred Enanga revealed that some of the suspects arrested over the serial murders that have claimed close to 30 lives pinned the two MPs for orchestrating the killings.
He revealed that according to intelligence, the duo allegedly held a meeting in Ndeeba, Kampala from where they met some of the killers promising them wealth.
He says they believe the motive was to create animosity against elderly victims for selfish gains.
The duo, Kawempe North legislator Segirinya and Makindye East MP Sewanyana are expected at the Police Criminal Investigations Directorate headquarters to record statements and give their side of accounts regarding the claims
In bid to arrest the panga wielding leaders, Police has put a reward of shs 20 million bounty for suspected domestic terror cell leader