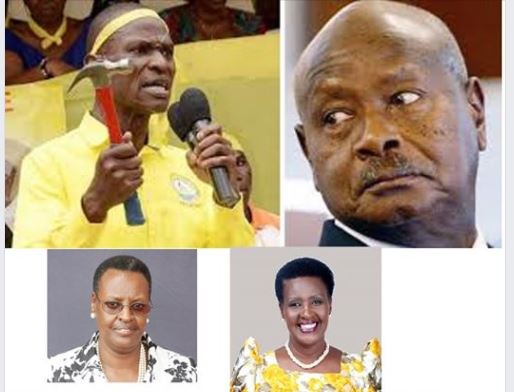 Many of you may have heard or read that Museveni okayed a section of government officials to sue Tamale Mirundi for repeatedly defaming and insulting them in the media ( NBS and radios) for a long period of time and subsequently NBS has cut ties with Mirundi.

From an impeccable State House source, this war of Tamale Mirundi is an extension of the war of two powerful women that once wielded equal power in state house and more or less equal influence over President Yoweri Museveni. That is Amelia Kyambadde and Janet Kataha. The story goes as follows;

When the fights of Kyambadde, Janet Museveni and her daughters reached threatening levels, Museveni advised her close confidant Amelia to go and contest in Mawokota and gifted her Shs5Bn for the campaign so as to give her enough financial muscle to battle the Janet camp.

Ameila feared and told Museveni that Janet and her wealthy in-law, Kutesa, would get an opportunity to finish her in the campaigns by backing her rivals. She also complained that Janet would use Kutesa’ s cousin Sam Rwakojo at EC to ensure that she is rigged out.

Museveni convinced Amelia that all that wouldn’t happen. He assured her of the money and security at all costs and indeed he provided. In addition Museveni promised to appoint Amelia minister for the Presidency after winning her constituency so as to enable her remain with her State House influence.

In fact Amelia was asked to name a PPS of her choice and she named Kintu Nyango, a novice that would keep depending on her for all instructions. Ameila even created and furnished a lavish office for the minister of the Presidency in Entebbe in preparation of her new posting after elections something that had never happened. All ministers including the Vice president sit outside State House.

After elections, Amelia won after fighting a tough election. She truly believed that Janet Museveni and Kutesa had a hand in supporting her opponents. She couldn’t hide her bitterness in the media. She therefore expected to be appointed minister for the Presidency.

Shockingly Museveni didn’t name her minister for the Presidency but posted her to ministry of trade, a less influential docket in terms of political power. That infuriated Amelia. Certainly Janet and her powerful in-law Kutesa had a hand in making sure Amelia doesn’t come near State House again.

Kabakumba Masiko was appointed minister for the Presidency instead. Ameila’ s Camp was bitter. She even showed her bitterness openly to Museveni. Ameila’s camp started fighting Kabakumba and looking for any scandal about her that would facilitate her immediate exit from the Presidency so as to enable Amelia come back.

Indeed Kabakumba was out-staged following her radio Mast scandal which many believed wasn’t a serious crime but just politically motivated. Yet again, after the exit of Kabakumba, Amelia expected to come to her earlier promised post of the Presidency.

And Museveni also wanted Amelia there so as to help him given their long time working relationship. Janet and team again fought. Museveni gave in to them and asked them to nominate someone of their choice but who is also competent and ready to fight the likes of Amama Mbabazi, who were already forming covert anti- Museveni networks at the time.

Janet nominated her blue eyed boy Frank Kajjiji Tumwebaze. Museveni accepted because Tumwebaze had been very combative in the media eloquently taking on Museveni opponents which no other minister could do. That was yet again another blow to Amelia Kyambadde., because she also hated Tumwebaze.

Since then Kyambadde officially joined the rebel group of MPs, sometimes coming out controversially on many issues in the open. In fact, Kyambadde, like Idah Nantaba had refused to cast the Age Limit vote. She was in the Parliament Cafeteria as they voted until the Chief Whip Ruth Nankabirwa appealed to the President on phone to call and order Ameila to go and vote. Amelia had switched off her phone. Museveni called on Nankabirwa phone and asked her to take the phone to Amelia. Finally Amelia voted under duress. She came panting to the House and voted last when her name had been called many times.

So after Amelia and her team lost the Presidency Ministry again to Tumwebaze, she mobilised her troops to start fighting the Janet camp and their allies.

Amelia called Kalisa and his wife Julie, who she had both mentored while still at State House and empowered to go to the Private sector, and asked them how they could use the media to fight Janet and her team.

Around that time Kalisa was given money since he had no known business that was earning him big money apart from his State House job under Amelia, to buy off Nabeta from NBS TV. He did and revamped NBS.

It’s rumoured in State House and intelligence circles that actually NBS TV belongs to Amelia with Kalisa as the front. Amelia and Kalisa agreed to recruit combative journalists like Teddy Seezi Cheye to fight their political battles. They landed on Tamale. He was recruited and put on NBS TV. Instructions then were to take on Janet Museveni people like Andrew Mwenda, Robert Kabushenga, Frank Tumwebaze, Jennifer Musisi, Nakalema, Odrek Rwabwogo, Kutesa, Pastor Kayanja etc.

Coincidentally, Mirundi had his issues with Mengo and was their avid critic and this in a way endeared him to Museveni since Mengo had always been anti- Museveni and most of his Buganda political lieutenants feared to answer Mengo in support of Museveni.

So, Tamale was being used by Museveni to take on Mengo fiercely and at the same time used by the Amelia camp to take on Janet agents. He grew a big audience on NBS TV and other radios that Museveni enjoyed especially in Buganda. Whenever the Janet camp complained about Tamale Mirundi, Museveni would silence them and tell them to ignore the drunkard. Museveni wanted Tamale to continue especially on the Mengo front. They therefore feared to take on Tamale in court for fear of Museveni ‘s protection. This went on and on.

These two ladies are both allies of Janet Museveni and she is the one who recommended their appointment. They have been at the Covid frontline initially winning admiration for themselves from Museveni for their dedication and professional understanding of their docket. This however rubbed Amelia camp the wrong way.

That is how in the initial press conferences of the President Amelia would make it a point to disagree on camera with the President trying to oppose the ministry of health recommended lockdown measures as being anti-poor people. This earned her praise from the public while it annoyed Museveni and Janet Team. In fact it was agreed that in the subsequent press conferences, Amelia should be cut off. Indeed she Never appeared at the last 3 press conferences.

Tamale upped his usual game on NBS to tear into pieces his usual targets (Janet agents as they call them) this time directing all his guns at Aceng and Diana Atwine. Unlike the other people that Tamale has been attacking perennially and Museveni ignored him because of his trade-off on attacking Mengo, he couldn’t allow these two ladies (Diana and Aceng ) to be attacked and diverted by Tamale for fear of losing their energy at this critical time.

So Janet, Diana and Aceng faced the President last weekend, threatening to resign because of Tamale and Amelia sponsored character assassination. Museveni believed them because there is nothing these ladies do without consulting him. And he still wants them at this point in time.

This time Museveni promised to tackle Tamale and in fact also advised them to sue him in addition. They told Museveni that they didn’t have time, money for lawsuits given the fact that they were busy with the Covid fight.

He agreed with them and thus directed his personal lawyers Karugire and Kiryowa to talk to NBS, Tamale and all other radios. On learning this, NBS TV’s Kalisa and Pastor Senyonga of Top Radio cut off Tamale Mirundi.

The fight therefore is a renewed fight between Amelia Kyambadde and Janet Museveni. Word going around State House is that after this term and elections, Kyambadde is likely not to be reappointed to cabinet.