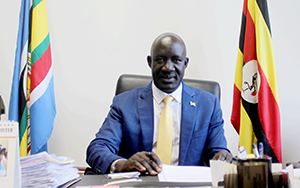 The Bishop of Soroti Diocese, Rt. Rev. Kosea Odongo has expressed shock at reports that the Minister of Disaster Preparedness beat up, and wounded priests in the area. The injured churchmen are undergoing medical treatment.

It is reported that State Minister for Disaster Preparedness, Musa Ecweru, assisted by his bodyguard, identified as Juma Odiope, assaulted the three priests on Saturday afternoon, accusing them of encroaching on his land located at Wera Town Council.

The victims are Rev. Simon Peter Olato, the Parish Priest of Wera Church of Uganda and his two lay readers, Benjamin Otasono and Simon Peter Eriku of Aten and St. John churches respectively.

The priests were found planting cassava and tree seedlings in the land belonging to St. John CoU in Wera. The inputs belong to Operation Wealth Creation ( OWC )which is partnering with Soroti Diocese.

According to Rev. Olato, the minister stopped and came to the garden where he started asking questions about the land. He notes that before any responses were given, the minister and his bodyguard started beating them up, something that scared away the rest of the followers at the scene.

Rev. Olato explains that the minister personally beat him and slapped the two lay readers before ordering his bodyguard Juma Odiope to proceed and beat them with a metallic rod.

Bishop Odongo, in a press briefing over the matter on Monday afternoon, said that the minister’s actions are barbaric and very unfortunate for a leader of his calibre. He said that the nation shouldn’t trust such leaders with responsibility and appealed to President Museveni to intervene in the matter.

According to Rev. Olato, the Police in Wera Police Post declined to record the case and referred them to the Amuria Central Police Station.

When contacted, the acting Police Spokesman for East Kyoga, Oscar Ageca said that police preliminary findings indicate that the clergy attacked the minister when he attempted to inquire about the land.

After the men of God had been beaten up, Ecweru’s young brother Robert Adiama, who is also the Resident City Commissioner of Soroti, offered to take the victims for treatment but the offer was turned down.

Up to now Minister Ecweru’s known phone numbers are completely off.