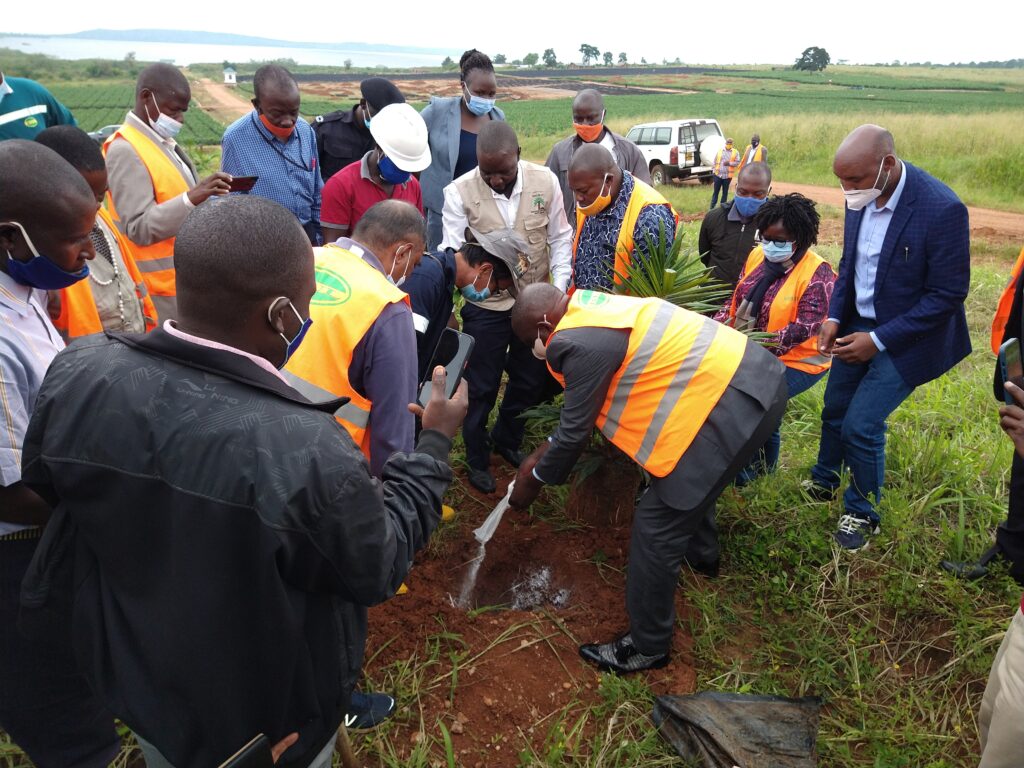 The minister agriculture, fisheries and animal husbandry, Hon. Vincent Ssempijja, revealed that the Ugandan government will save capital flight of  800 million US dollars per annum. Minister Ssempijja revealed this while he was officially flagging off palm oil planting at Buvuma.

“Government has been spending a lot of money on importing cooking oil, fertilizers, soap and animal feeds. But if the project succeeds in three years from today we shall save 800 million US Dollars and that money will be diverted to other things” revealed Ssempijja.

Ssempijja also toured a nursery bed at Nkuusi Village Busamuzi sub county, which has one million palm oil seedlings which is going to support the Buvuma palm oil outgrowers and those of Buikwe and Mayuge districts.

“Lake Victoria is no longer lucrative as it used to be, so let the fishermen utilize this opportunity because the project has come with multiple effects like electricity, Roads banks and a new ferry.” Said Robert Migadde the area member of parliament.

However, at the function the residents led by their LC. 1 leaders who included Sebastian Ndugwa raised a concern that some people were totally not compensated and those few who received the money were underpaid.

“We are not against the project but let them first pay the people who are complaining, there is food insecurity at the island because vegetables oil development project (VODP) coordinators stopped them from using their land after promising them compensation. Said Ndugwa.

Mr George Wabwire, another resident, said his ten acre piece of land was reduced to six acres after the survey which was conducted in his absence.” The project coordinators also brought in ghost residents we don’t know in our areas and they were the first to be paid and where paid handsomely, the coordinators don’t want to listen to our complaints.”  Said Wabwiire.

“They didn’t consider us because we are bibanja holders and that’s the major reason as to why we are not compensated, the  project coordinators and valuers cheated us, they undervalued our property.” Residents complained.

The affected residents ran to Mukono High court to seek justice and have vowed not to leave their land for the oil project, not until they are paid

Ms Masaba Cony said so far, they have spent more than Shs. 50 billion on compensation. “ We don’t force people to sale their land, it is a willing buyer willing seller procedure, all those people have already received their money, some complied and secured land somewhere but there those who want double payment.

Buvuma district residents district commissioner Juma Kigongo warned some residents of trying to seek double compensation. “So far we have arrested one person who was resisting the project’s works yet he was compensated .” RDC warned.

About 5,000 hectares have been secured by vegetables oil development project VODP, but in total they want 7500 hectares at the island. The most affected persons are of Busamuzi Sub-county and some parts of Buvuma Town Council.