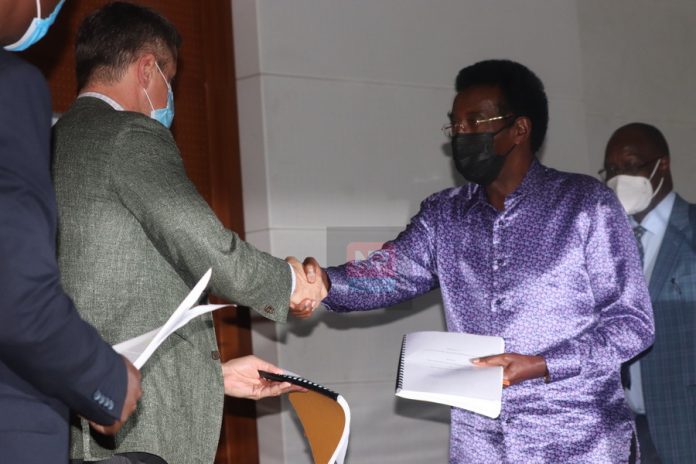 Joint Stock Company Global Security, a Russian company that was awarded a 10-year contract on Friday to install digital monitoring system in all motorcycles and vehicles in Uganda is facing bankruptcy litigation in Moscow, court documents in Russia reveal.
The company is also facing other debt related cases filed between 2019 and 2021 in Russia, raising questions of whether the contract in Uganda is a lifeline the company needs to beat off bankruptcy litigation for its very survival, and whether government of Uganda did adequate due diligence before engaging Global Security.
The Permanent Secretaries for the Ministry of Works Bageya Waiswa and Ministry for Presidency Yunus Kakande signed the agreement on behalf of the Ugandan government. Security Minister Jim Muhwezi witnessed the signing.
Joint Stock Company Global Security was sued by LLC “Rus Prom-Technologies”, another Russian company that wants it declared bankrupt. The case was filed in the Arbitration Court of City of Moscow on September 17th 2020 and accepted on October 20th 2021.
“On September 17, 2020, the Moscow Arbitration Court received an application from Rus-Prom-Technology on the recognition as insolvent (bankrupt) of JSC Global Security,” a ruling by the Arbitration Court of City of Moscow dated 20th October 2020 says. “Having considered the received application and the documents attached to it, the court considers them sufficient for the acceptance of the application for hearing.”
Though the case was accepted for hearing, the hearing sessions have been postponed several times as Global Security fight to pay the debt its owes Rus-Prom-Technology.
In another case filed in March 2019, Rus-Prom-Technology had sued Global Security for failure to pay 16.6 million rubles (Russia currency) which is about $220,000. Rus-Prom-Technology won the case.
After winning the case, Rus-Prom-Technology proceeded to file case in which it wants Global Security declared bankrupt. For Global Security to fight off bankruptcy, court has ordered it to pay Rus-Prom-Technology.
“The debtor’s representative petitioned to postpone the hearing for debt repayment, the applicant’s representative did not object to the request,” a ruling dated 30th June 2021 reads. “Having considered the petition to postpone the hearing, having studied the materials of the case, the court concludes that the stated request is well-founded.”
Court in March further directed Global Security to produce evidence of debt repayment during the next court session on September 3rd 2021. Global Security is facing other debt litigations in Russia. Stok-Trading LLC sued it for a debt of 1.2 million rubles, JSC Royal Silk Factory sued the company for a debt of 19.9 million rubles, Turday GS sro Slovak Republic sued the company for a debt of 6.1 million rubles, JSC ZVI sued the company thrice, first for a debt of 23 million rubles (about $300,000) then a debt of 10 million rubles (about $135,500) and 4.6 million rubles (about $62,330).
Global Security has also been sued by Limited Liability Partnership “Orken Alem” for a debt of 8.5 million rubles and Gu Main Department of the Pension Fund of the Russian Federation for failure to pay 10,000 rubles (about $135) and 455,00 rubles (about $600). All these cases were filed between 2019 and July 2021.
Ministry of Works Permanent Secretary Bageya Waiswa told URN in a phone interview that information about the company facing bankruptcy litigation in Russia is news to him. “That is news to me. But we have our Financial Intelligence Authority, we can give them such information and they look into it. They have the network world over to probe such things,” he said. “But me, I have no comment because I am hearing it for the first time.”
Rather surprisingly, the information about the company’s troubles is available on Honest Business website, which curates information about businesses and companies in Russia, and FIA should certainly know this, more so as the the project is being spearheaded by the ministry of security. All details of the company’s troubles are also available on the court website and are public information.
Waiswa said they did a due diligence on the company. “We don’t just sign a contract with somebody we have not checked. But if there is a new development, you can’t rule it out.”