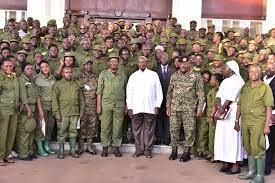 The looming RDCs/RCCs reshuffle could be a massacre with over 100 incumbents likely to lose their posts.

According to sources familiar with the exercise, both full RDCs and their deputies will be affected.

Sources say the consultation process on who should be retained, dropped and appointed with an input of various stakeholders was completed last month and draft names were sent to the appointing authority-President Museveni.

We have further learnt that the President has now forwarded the same names to the Internal Security Organisation (ISO) for vetting.

Sources knowledgeable about the vetting process intimated to us that this is the most critical phase which must be handled with a lot of scrutiny, a reason why the announcement has been delayed, though imminent.
A criteria is reportedly being followed to reach a final conclusion on who gets out and who stays as follows:-

We have learnt that the President is tired of sloppy and inept RDCs who have been just sleeping on the job. Some RDCs have been faulted for playing around with responsibilities, resources, and service delivery. We have reliably been informed that the vetting team has been guided on this and those who will be found wanting will pay the price. “The appointing Authority is tired of lazy RDCs. He gave the vetting team clear instructions to mop up and clean the whole network,” a source told this publication.

Sources say the vetting team is also keen on RDCs that have been riddled with scandals. Some scandals involve fights between fellow RDCs, technocrats, ministers, RDCs taking bribes, sex scandals, ordering torture of citizens, colluding with land grabbers among others. Other scandals are those where some RDCs failed to handle certain matters (policy in nature) putting the whole government in the spotlight for the wrong reasons.
These scandals undermined image and performance and at the same time portrayed a negative picture in the eyes of the public, donors and potential investors. Culprits have been targeted in this coming reshuffle.

We have also learnt that the security vetting team is also in possession of the Minister of State, Office of the President for Economic Monitoring Peter Ogwang tour findings report. Since August last year, Ogwang under supervision and guidance of Presidency Minister Milly Babirye Babalanda embarked on touring districts to check on government projects. However, he found almost everything a mess—misuse of funds, fraud, corruption and shoddy work among others—and RDCs in the areas he toured were blamed for not doing their supervisory work. It was also discovered that some RDCs were colluding with culprits to steal.

The vetting team has also reportedly been briefed to pay more attention to professionals, technocrats and some good cadres as RDCs. Most of these are in the private sector and are always in touch with the common people while running their daily businesses.

By contrast, appointing ambitious politicians, political failures as RDCs who are even unpopular in their areas wouldn’t yield much. It should be recalled that last year, Museveni told the NRM Central Executive Committee (CEC) meeting that he had realized one of the reasons why RDCs underperform is because they concentrate on politics as opposed to development-related mobilization.
Museveni now wants the new RDCs to prioritize mobilizing people in the districts of their respective jurisdiction to embrace development programs that can get them out of poverty rather than scheming for political ascendancy.
We have also learnt that some political schemers and speculators are now appearing on local radio stations purportedly to drum support for government programmes like emyooga and parish development models,though with plenty of inadequacy in knowledge to catch the attention of powers that be especially DISOs to make favourable recommendations to officials up in Kampala.

Museveni also said time has come for the RDC office to be taken very seriously as opposed to turning it into a dumping ground into which Ministers lobby for their girl friends, relatives and former campaign agents to be deployed to merely access monthly salary.

It’s because of the ongoing security screening process that the list has been delayed and now the Office of the President, through the RDC Secretariat has come out to dismiss a fake list that is circulating on social media.

The statement, signed by James Tweheyo, an official at the RDC Secretariat adds that the appointment of the RDCs is done by the President and only official government communication channels can pass it on to the public.

The same statement further encourages RDCs, and their Deputies to desist from getting diverted by the fake rumour, but rather continue executing their duties as they have been doing.

Below is the statement in full: “It has come to the attention of the Office of the president that some ingenious people are circulating a fake list of RDCS/RCCs and deputies.
Please take note that the list in circulation is fake .

Disregard that information and treat it with the contempt it deserves.

The appointment of RDCs is Done by His Excellency the President and at his pleasure, official information is released. This is therefore to inform and request all RDCs/RCCs/deputies to continue doing their jobs with vigor and confidence,” James Tweheyo,
Secretariat of RDCs/OP.”