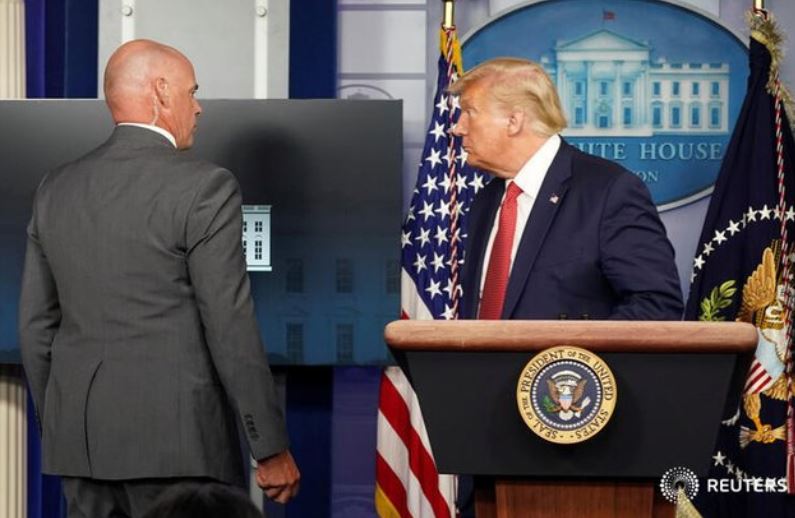 The United States Secret Service abruptly escorted President Donald Trump out of the White House press room in the middle of a briefing on Monday because of a shooting outside the White House.

Trump returned to the media room several minutes later and said a person had been shot by law enforcement and taken to the hospital. He said he understood the suspect had been armed.

“It was a shooting outside of the White House,” Trump said. “It seems to be very well under control. … But there was an actual shooting, and somebody has been taken to the hospital. I don’t know the condition of the person.”

He said the shooting was near the fence at the edge of the White House grounds.

The U.S Secret Service said late on Monday that the White House was not breached during the incident and no one under Secret Service protection was ever in danger.

The Secret Service said in a tweet “the investigation into a USSS officer involving the shooting is ongoing. A male subject and a USSS officer were both transported to a local hospital. At no time during this incident was the White House complex breached or were any protectees in danger.”

The doors to the White House briefing room were locked shortly before Trump was escorted out.

Nobody else was wounded in the shooting, Trump said. He praised the Secret Service response and said the agency would have more details on the event later.

“There were no details – we just found out just now,” Trump told reporters.

The president had been speaking about the stock market when a Secret Service agent interrupted him at the podium only minutes into the briefing.

Treasury Secretary Steven Mnuchin and Office of Management and Budget Director Russ Vought were also taken out of the room.

Trump told reporters he had been taken to the Oval Office, which is in the West Wing near the briefing room, after he was escorted out.

The Secret Service said that the Secret Service Office of Professional Responsibility will be conducting an internal review of the officer’s actions and the Metropolitan Police Department was contacted to conduct an investigation.