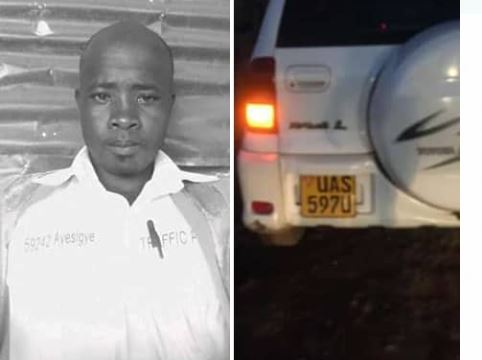 The Police in Uganda are hunting for an errant driver who knocked a policeman dead and sped off shortly after causing the accident, in Rubaga division, a Kampala suburb.

According to our sources in police, the tragic incident occurred in Kampala after an errant driver of motor vehicle number UAS 597U, a Rav4, fatally knocked down a Traffic Policeman identified as Innocent Ayesigire, but sped off shortly after causing the accident.

The accident victim was later rushed to Lubaga Hospital, where he died shortly after arrival, due to the injuries he has sustained during gruesome accident.

By the time of reporting this story, sources privy to the matter had revealed to Elite News.com that Ayesigire had passed on, although the Uganda Police traffic  department was still hunting for the errant driver, who is currently on the run.

However, despite the tragic incident, the Uganda Police Spokesperson  CP Patrick Onyango is yet to issue a statement about the matter, as Ayesigire’s family members and relatives  prepare to bury his remains.

But it should be noted that there are several hit and run accidents that have occurred during the COVID-19 lockdown, many of which have not been recorded by the  Traffic police, although they have claimed several lives.