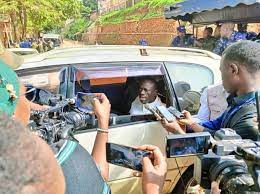 Police in Uganda has blocked a public debate that had been organised to discuss the East African Crude Oil Pipeline (EACOP) project.
The debate which was organised by the African Initiative on Food security and Environment (AIFE-Uganda) was scheduled for Tuesday 24, at Emerald Hotel in Wandegeya in Kampala city is.
AIFE-Uganda is a not-for-profit organization whose role is to organize communities to be proactive against climate change.
Opposition leaders Robert Kyagulanyi Ssentamu also known as Bobi Wine of the National Unity Platform (NUP) and Dr Kizza Besigye were invited to the public debate as main speakers.
Earlier the organisers had accused police of intimidating their members, insisting that the meeting was organised lawfully.
“We condemn the police for intimidating our organizers. The meeting is within the laws of Uganda. We have the freedom to have our opinion. Come attend the conference and make your voice hard,’ AIFE-Uganda said in a statement.
The debate coincides with another event in Bulisa, western Uganda where President Yoweri Museveni is launching the oil drilling activities at the Kingfisher oil field.