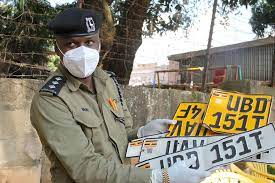 The joint security forces in Kiira, arrested four people suspected to be behind the theft of motor vehicle number plates in the Busoga region.

“We have since established that the above telephone numbers belonged to a one Hussein Kato who died sometime back,” Mubi said.

Mubi noted that through police experts, they tracked down the culprits successfully and arrested the ring leaders of the criminal gang.