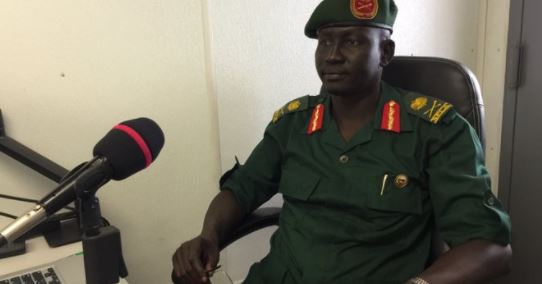 The army has reported the death of 81 people following intense fighting between armed civilians and the disarmament force in Warrap State, South Sudan, although some sources have since put the figures at 120.

Two days of clashes reportedly led to the killing of mostly soldiers in Tonj area.

According to the SSPDF spokesperson, 55 officers and 26 civilians died in the fighting over the weekend.

On Monday, local officials said dozens of people were killed in Luanyjang County when armed civilians clashed with government forces.

The army initially said it responded to Luanyjang fighting by sending reinforcement to police officers who were under attack from armed youth who attempted to release a relative from prison.

But the latest fighting is said to have been triggered by an argument over a red scarf between some soldiers and an armed youth.

According to Maj.-Gen. Ruai, the armed youth refused to hand over the scarf to the officers resulting in some confrontations.

He said during the night, the youth attacked military outposts -twice – leading to fighting.

“The youth mobilized again, and in the morning they, launched another attack on our defensive position. That attack resulted in major losses between our forces and them,” Maj.-Gen. Ruai told Eye Radio.

The SSPDF now wants the traditional chiefs to identify the culprits that attacked SSPDF disarmament force garrison in a place called Romic.

The army spokesman said the disarmament forces have withdrawn to Ngab Agok to reduce tension in the area.

Maj.-Gen. Ruai added that those wounded during the clashes have been airlifted to Juba Military Hospital.

The SSPDF launched the disarmament exercise in Tonj areas last month due to what it described as the militarized nature of communal violence there.

Maj.-Gen. Ruai affirmed that the disarmament exercise will continue in Greater Tonj.

The military headquarters is urging intellectuals, legislators, local chiefs and residents of Warrap state to support the disarmament exercise to help restore peace and security.

Last week, the South Sudan Action Network on Small Arms suggested that the communities may resist disarmament if the government does not offer them and their cattle enough protection.