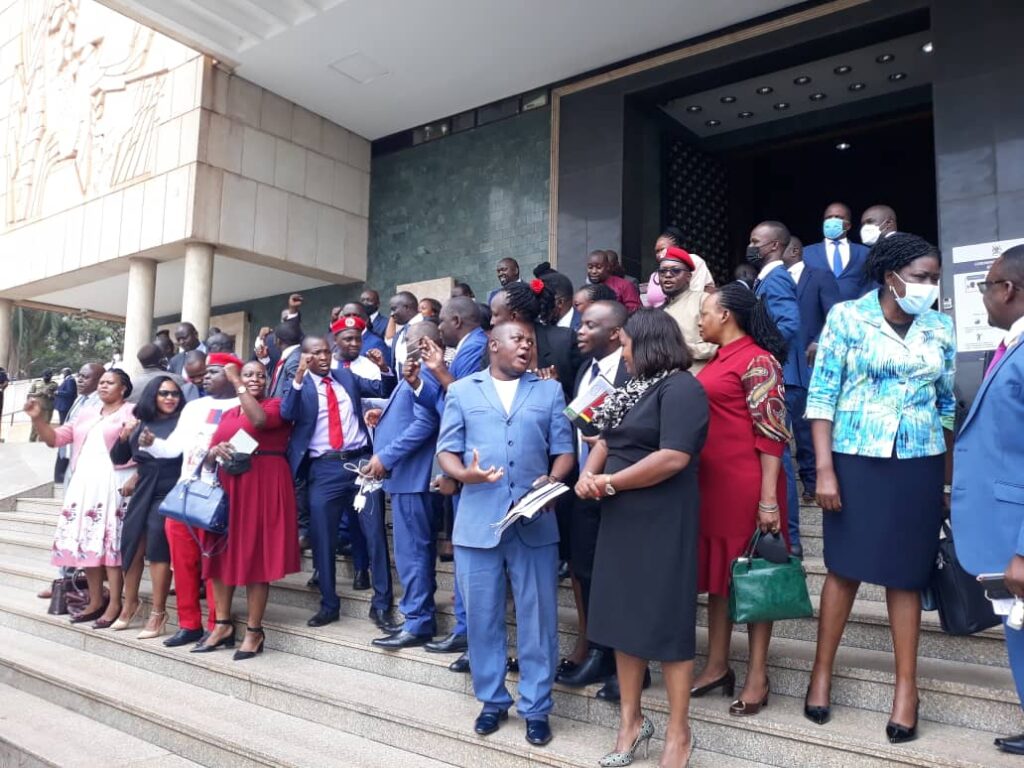 The Leader of the Opposition, in Parliament Hon Mathias Mpuuga has announced that opposition legislators will boycott plenary for two weeks until the the plight of tortured and missing persons is addressed.

A group of opposition MP’s led by Mpuuga marched out of Parliament chaired by the Deputy Speaker Anita Among and stationed outside.

Hon Mpuuga later told journalists that they intend to return to Parliament in two weeks with a motion on the plight of tortured and missing persons.

He said that the security agencies have continued to torture and detain suspects in illegal places, denying them access to justice in the courts of law.

“Our first action is this protest, it will go on for the next two weeks but in the meantime we shall be coming here everyday to inform the country of our next course of action”. He said.

Mpuuga added that if Mps on the ruling party are shameless and believe that torture is preserved for only those against them they can go on, he assured them that they have no business as long as citizens are being terrorized.

Deputy Speaker of Parliament Hon Anita Among has declined to suspend Parliament indefinitely until government takes action on the recent cases of torture of individuals by state cooperatives.

The Speaker had been requested on Thursday by the Leader of Opposition in Parliament Hon Matthias Mpuuga to suspend the house until government issues a comprehensive report on the said cases of torture.

Speaking on the House floor, Mpuuga said Parliament had had enough of being taken granted by the government.

At the moment, no ministers from Defence or Internal Affairs were present in the House to respond to him, and neither was the Prime Minister.

Hon Among however, declined to this request alluding to her earlier directive for the government to come up with the report on torture by Tuesday next week.

“Let us give the Government the last chance and if they don’t bring the report on Tuesday then, I will allow you to speak whatever you want,” she said.

The Speaker also promised to go as far as suspending the house on Tuesday if the government doesn’t deliver, adding, “I am with you on this; let’s give it up to Tuesday. It will be the first item. If nothing takes place, then we will wait for it to take place first.”