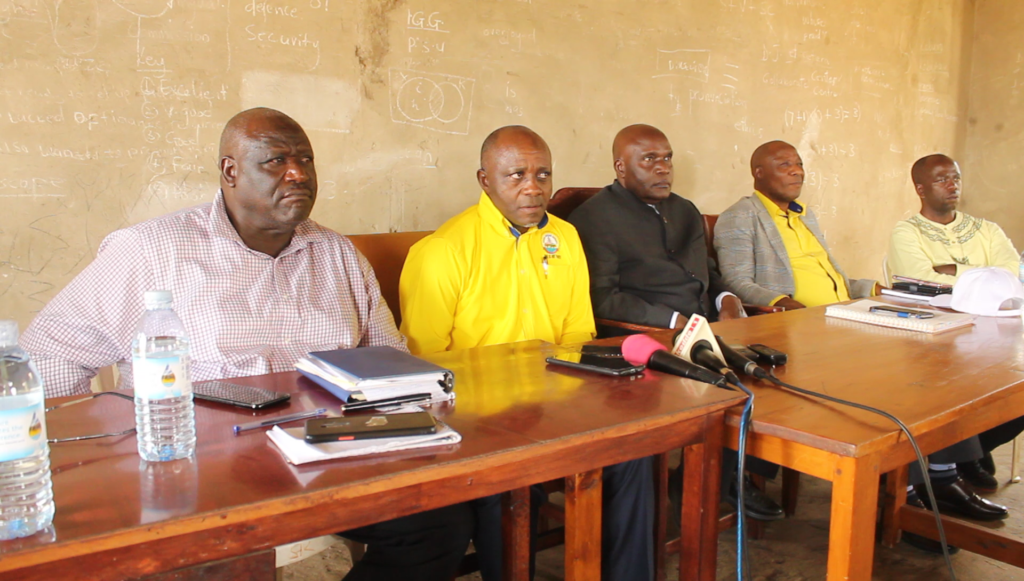 Kasese district NRM leaders urged to emphasize unity and peace in their quest to win the Busongora South bye-elections; this was sounded as National Resistance Movement’s Kasese district executive committee declared Mr. Gideon Mujungu as the flag bearer in the coming Busongola south by-election.
The flag bearer was revealed in the press conference by the District Chairman NRM Kasese Dr. Crispus Kiyonga who preached peace and unity between the candidates while campaigning.
The Busongora South constituency fell vacant after independent Mbaju Kathika petitioned the court of appeal protesting Hon. Mujungu’s victory and court.
The Kasese NRM party executive members expressed gratitude for the secretariat to come and engage the NRM local leadership unlike in the previous election whereby they could come and meet the electorate without the local party leaders, a move that caused confusion amongst them.
“In the past election we had challenges of our secretariat counterparts who could come in the district without informing us on the ground and this created confusion amongst us” Said Hon Godfrey Kabyanga.
Hon. Gideon Mujungu the flag bearer said in order for NRM to have a landslide win, the ruling NRM government should address key challenges in service delivery affecting the people of Kasese, for example the poor health facilities, lack of enough government schools, the Land question and Nyamwamba River Issue.
“Rulling NRM should address issues of services delivery in the district in order to win the hearts of Kasese District” said Hon. Gideon Mujungu
The NRM secretariat Director of communication, Hon. Emanuel Dombo applauded the district NRM executive for exhibiting unity because it is the only way to go and district committees elsewhere to buy a leaf from Kasese, Dombo pledged full support to the candidate from the secretariat.
“As NRM secretariat we are very grateful with the degree of unity exhibited by the NRM leaders in Kasese therefore we pledge full support to our candidate so that he wins again” Dombo said.
In the 2021 general election Mujungu won Busongora South parliamentary seat with 7,601 votes against 7,522, but his joy was cut short by the Court as it nullified the victory.