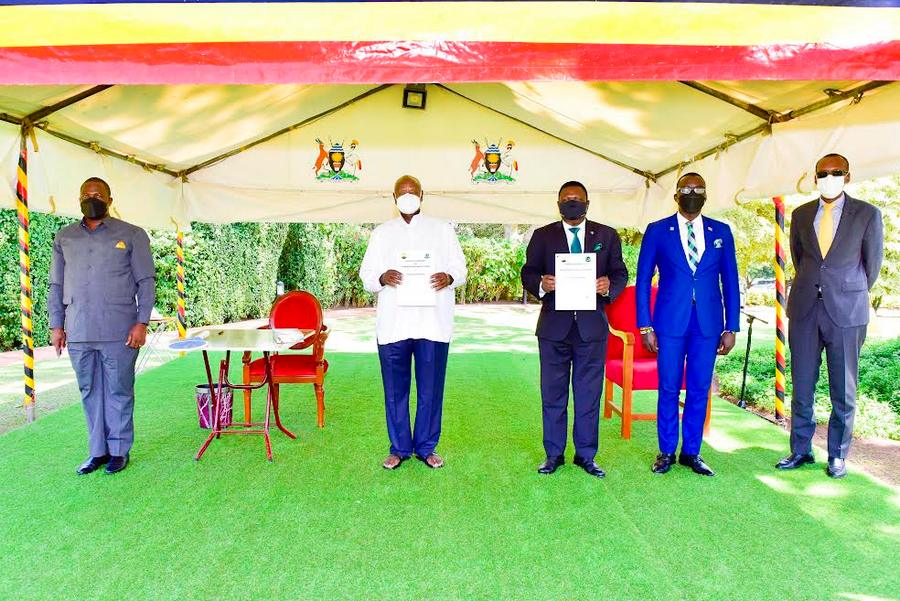 President Museveni hailed opposition Democratic Party for always being a good party towards the ruling NRM party and government at large.
“Although DP has been in the opposition, they have not been destructive. They criticise but are not destructive,” he said.
Museveni was speaking on Wednesday after the NRM party to which he is the national chairman signed a working cooperation agreement with the Democratic Party (DP) at State House, Entebbe.
He signed on behalf of the party, while DP president general, Nobert Mao, signed on behalf of DP.
NRM secretary General, Richard Todwong and that of DP, Dr. Gerald Siranda, also witnessed the signing.
After the signing the agreement, Museveni congratulated Mao upon agreeing to work on steering DP to work with the NRM.
He noted that this is something that should have happened at the top administrative level long ago.
“You know the history. I keep telling you that DP without Museveni is not a serious group because I was a very active member of DP,” he said.
The president said that DP had good quality and was definitely sincere and more straight forward.
Museveni said he was very happy with this milestone, saying that all this time although DP has been supporting opposition, they have not been destructive.
On his part, the DP president general appreciated the milestone on behalf of his party, saying that this is a continuous journey which started before some of them were born.
He told President Museveni that he now has the historical opportunity to gather party members scattered all over Uganda.
“You must look for them wherever they are in all the political parties and in all the corners of Uganda,” Mao said.
He said that DP is committed to adhering to what has been agreed upon and that this is a living document that should continue growing.
“This is a living document. It has to continue growing and we have signed it in a good faith,” he said.
Mao said the documents signed shows that they have managed to resolve the contradictions that they have been having.
He saluted the courage President Museveni exhibited all through and the risks he has taken saying that Museveni is the captain of the ship called Uganda and that it is important to pray for Museveni as he leads Uganda.