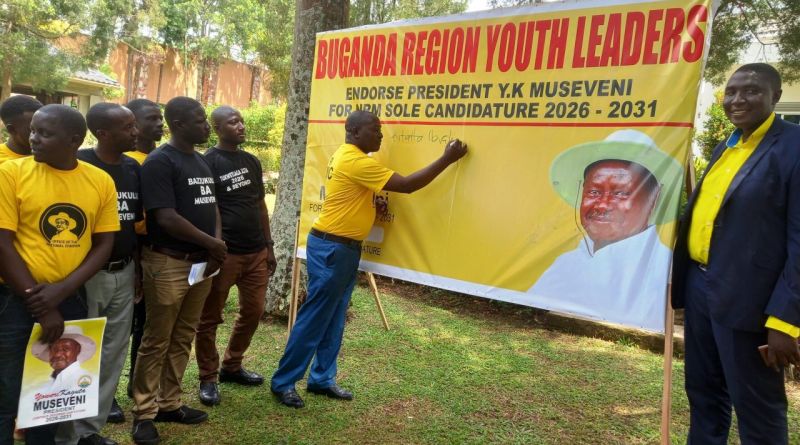 As the mission to win over the NRM Buganda youths by the Uganda’s presidential hopefuls continues, National Resistance Movement (NRM) youth leaders from Buganda have endorsed President Yoweri Museveni as the sole presidential candidate for the 2026 elections.
Museveni, who has been in power for 26 years, has not yet indicated that he will run for 2026.
Speaking at a press conference in Masaka city, the NRM youth leaders from Buganda region unanimously agreed and signed a petition to back president Museveni as the sole candidate in the coming elections.
The endorsement comes at a time when another section of youth within the NRM has intensified efforts to front the first son, Gen. Muhoozi Kainerugaba as their candidate in 2026.
Muhoozi has as well not yet affirmed that he will stand in 2026 but he has welcomed initiatives by some young people in NRM to front him for the presidency in 2026.
This could potentially lead to a clash between the two youth camps.
Ibrahim Kitatta also the LC5 Chairman for Lwengo district who also doubles as the Buganda region NRM youth chairperson revealed that NRM Buganda youth still see Museveni as a strong leader still capable of solving the country’s pressing challenges.
“Many youths are still struggling with unemployment and this challenge can be solved by only an experienced leader who is President Museveni,” said Kitatta.
Gonzaga Mutesasira, the Lwengo NRM youth chairperson, said that they have decided to back President Museveni to safeguard the country’s wealth like oil and other natural resources.
“As drilling of our oil nears, we need a strong leader who can protect it,” Mutesasira said.
Nicholas Nuwagira the NRM youth league chairperson for western Uganda was tasked with the responsibility of delivering the petition to the president.
In the 2021 general elections, Buganda sub region voted overwhelmingly for the opposition National Unity Platform (NUP), leaving the NRM reeling in its wake.
Many leaders in the party have since blamed the loss on NRM’s failure to address the problems of the youth like unemployment.