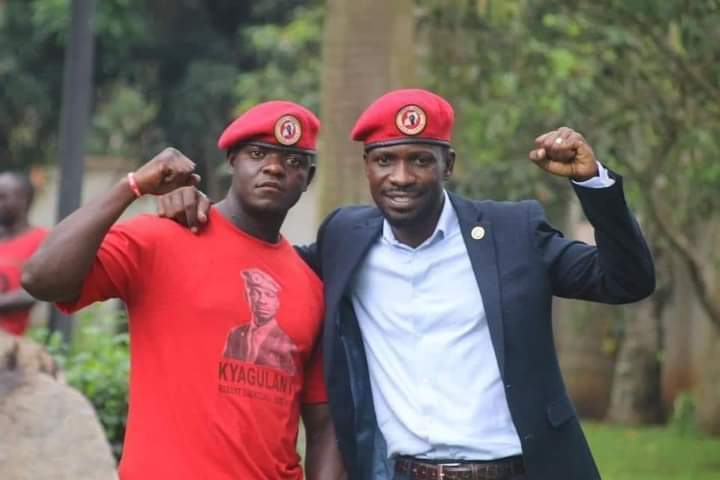 Ugandan’s presidential opposition candidate Bobi Wine said one of his bodyguards was run over and killed Sunday by a military police truck, while taking a journalist to the hospital.

“I regret to announce the murder of my security team member Francis Senteza Kalibala aka Frank. He was deliberately ran over by military-police truck,” Wine, a pop musician turned politician, wrote on Twitter.

“I regret to announce the murder of my security team member Francis Senteza Kalibala aka Frank. He was deliberately ran over by military- police truck, No. H4DF 2382 which blocked us in Busega on our way to Rubaga to get Kasirye Ashraf emergency medical attention. What a day!

A spokesperson for the Ugandan military denied Wine’s bodyguard had been targeted.

“UPDF (Ugandan People’s Defence Force) would like to clarify that the late Senteza … was not knocked by a Military Police Vehicle as purported, but rather fell off a speeding car … he tried to jump to (sic) but fell off,” Brig. Gen. Flavia Byekwaso, the spokesperson, wrote on Twitter late on Sunday.

Wine said the incident happened while his team was taking local journalist Ashraf Kasirye to seek medical help, after he had been wounded by police.

“He is in a critical condition,” Wine wrote on Twitter of Kasirye’s injury. “We are hoping against hope that he will live.”

Police spokesman Fred Enanga told Reuters that supporters of Wine had gathered on Sunday in Masaka, 125 kilometers (78 miles) southwest of the capital Kampala.

Wine tweeted that he had attended a church service in the town.

Bobi Wine calls on US to hold Uganda accountable on human rights, says he was nearly killed twice

Enanga said Wine’s supporters were “violent” but gave no further details on what they were doing.

“Teargas was used to quell the violence. The journalists were regrettably caught up during the process of dispersing the violent group,” Enanga said in a statement online, adding that the circumstances were being investigated.

Enanga told Reuters that Kasirye sustained a serious injury above his left eye “allegedly from a (teargas) canister.”

In an interview with CNN earlier this month, Wine said he had nearly been killed twice in recent weeks and called on the international community to hold Uganda’s government accountable ahead of elections next month.

Wine also accused the military of taking over the election process and said his campaign team have been tear gassed and shot at with live bullets.

Bobi Wine says police shot through the window of his vehicle as he attempted to pass a roadblock on December 1.

Wine is challenging incumbent President Yoweri Museveni, who has been in power for more than 30 years, in the January 14 election. The musician has accused Museveni of being a dictator responsible for human rights abuses, after at least 45 people were killed in protests last month sparked by the arrest of Wine for contravening Covid-19 regulations at a campaign rally.

While authorities have said the restrictions are necessary to curb the spread of Covid-19, opposition members and their supporters say they are an excuse to curb campaigning before the election.

At the time, witnesses told CNN that police, military and plainclothes gunmen fired high caliber rifles in dense urban areas to quell the protests. Those accounts were backed up by multiple videos shared on social media during the chaos.