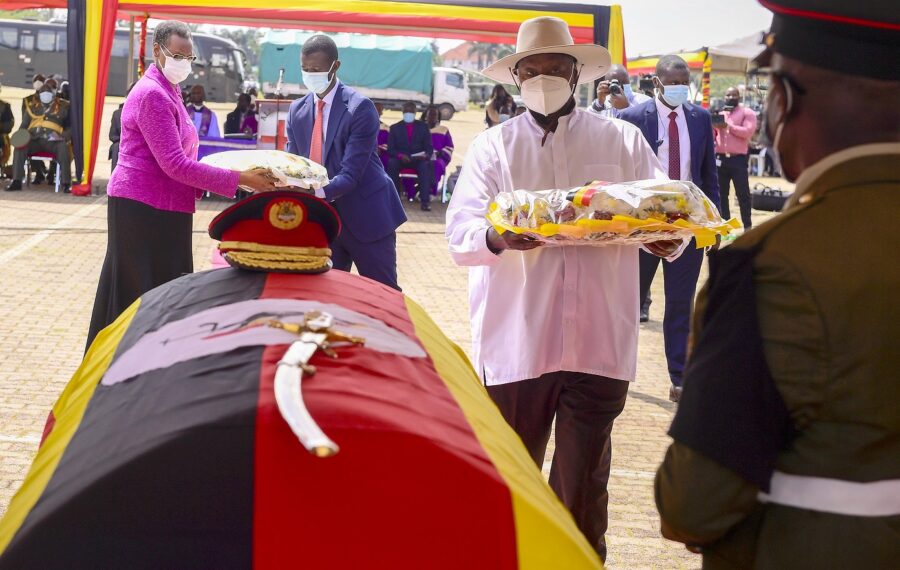 President Museveni has described as naysayers who are wasting their time, members of the public who are insulting former Security Minister and NRA bush war hero, Gen Elly Tumwine who died last week.
Speaking while eulogizing Gen Tumwine at Kololo independence grounds on Monday, Museveni, who led the five year NRA war described the deceased as a patriot.
“Don’t worry about those Ugandans. When we were fighting Amin, many were calling us vagabonds(when we went to the bush) because we had left jobs. A job of working under Amin and you call it jobs? For us we were despising them. For us we decided to fight .By the time we came, we were no longer vagabonds but Moses. We had become David who killed Goliath. Don’t think about those fellows talking nothing. They are wasting their time and talking nothing,” Museveni said.
The president said unlike many, including those insulting the deceased, Gen Tumwine achieved more in a small time that many might never do.
“Gen Tumwine dying at 68 was still young but had achieved a lot and I am happy to hear people say he died a satisfied man.”
Describing him as being resilient , Museveni said despite being shot, badly injured and lost his eye, Gen Tumwine returned to the frontline to continue with the bush war, a thing he said a few would afford.
Tumwine was a resilient man because he was injured badly at Bukomero but he came back and continued(with the war).Young people should learn from that spirit of patriotism and sacrifice.”
The president also dismissed that Gen Tumwine has left earth completely, noting that whereas he has died, a piece of him is still left behind through his children.
“There is eternity through children. Tumwine has not died. He is abundantly here through children. He was one and now many. Giving birth is part of eternity. God created man to ensure establishing dominion over nature. If God wanted us to be in heaven, why did He bring us here? He brought us to do something- at least to improve something. What you do on earth really matters. My advice is always to avoid evil and believe in God.”
President Museveni’s comments stemmed from social media posts by a number of commentators who accused Gen Tumwine of having a sense of entitlement for having participated in the 1986 NRA bush war that brought the current government into power.
Many accused him of speaking recklessly towards the respect for human rights and this mainly stemmed on his comments following the November 2020 riots that saw 50 people killed.
In the aftermath of the protests, Gen Tumwine who was then security minister said police and other security forces have a right to a kill any person.
Speaking on Sunday, one of the daughters, Cynthia Tumwine asked for forgiveness for her dad in case he wronged anyone.
“While in hospital in Nairobi and while we were praying, one of the things we were convicted about was to seek forgiveness on his behalf. To ask God to forgive him for everything he did either knowingly or unknowingly. We seek forgiveness so that he is on a clean slate,” Cynthia Tumwine told mourners on Sunday.
“I also wanted not to only do it with God but also do it here that in case dad wronged you in any way, please forgive him. If you also wronged him, he forgave you. He talked about forgiveness every time.”