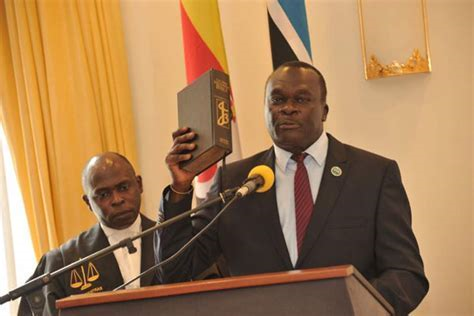 President Museveni on Thursday appointed Justice Alpfonse Owiny-Dollo as the new Chief Justice, becoming the 13th Chief Justice since 1962 when Uganda got her Independence. Likewise, Supreme Court Judge Richard Buteera was appointed Deputy Chief Justice. The two names have since been sent to Parliament for vetting. Justice Owiny-Dollo has been the Acting Chief Justice since June 20 when then substantive Chief Justice Bart Katureebe retired upon clocking 70 years.  The Chief Justice is the head of the Judiciary, which is one of the three arms of State, and it is the fourth most powerful office in the country after that of the President, Vice president and Speaker of Parliament. Justice Owiny-Dollo becomes the first Chief Justice to be elevated from the position of Deputy Chief Justice. The past Chief Justices were appointed from the Supreme Court Bench.  He became famous for having presided over the trial of the Kampala twin bombings in which he convicted several suspects for being behind the killing of at least 76 football fans at Kyadondo Rugby Club and Ethiopian Village in Kabalagala. He also led a panel of five Justices to Mbale District, out of which four of them, upheld the scrapping of the age limit clauses from the Constitution by 317 MPs. Past Chief Justices Sir Andley Mckisak (1961-1962)KG Bennet (Ag Chief Justice) 1962-1963Sir Udo Udoma (1963-1969)Sir Dermont Sheridan, (1969-1971)Benedicto Kiwanuka (1971-1972)Samuel Wako Wambuzi (1972-1975)Mohamed Saied (1975-1979)Samuel Wako Wambuzi (1979-1980)George Masika (1980-1985)Peter Allen (1985-1986)Samuel Wako Wambuzi (1986-2001)Benjamin Odoki (2001-2013)Steven Kavuma (2013-2015) Ag. Chief Justice Bart Katureebe (2015-2020)

He was born on 18 January 1956 in present-day Agago District. He holds a Bachelor of Laws from Makerere University, and a Diploma in Legal Practice, from the Law Development Centre in Kampala, Uganda’s largest city and capital. His Master of Arts in conflict resolution, was obtained from the University of Bradford in the United Kingdom. He also has a certificate in advanced conflict mediation skills, obtained from the Center for Conflict Resolution, in Cape Town, South Africa.
1988: appointed legal counsel in the peace talks between then rebel outfit Uganda People’s Democratic Movement (UPDM) and government
Represented Agago County both in the CA and sixth parliament
1996: appointed minister of state in charge of Northern Uganda Reconstruction Programme (NURP)
2006: As a mediator, he met LRA rebel leader Joseph Kony face-to-face in Garamba forest in the DR Congo
2006: Served as a member of President Museveni’s defence team
2007-2008: Owiny Dollo was legal counsel to South Sudan’s Riek Machar, the chief mediator in the Juba peace talks between the Ugandan government and the LRA rebels.
2008: appointed as a judge of the High court
Served for seven years as High Court Judge
Was resident judge of the High court in Fort Portal
Headed High Court’s Execution and Bailiffs division
Worked at the International Crimes Division (ICD) of the High court

2015: Appointed to the Court of appeal
2017: Appointed Deputy Chief Justice