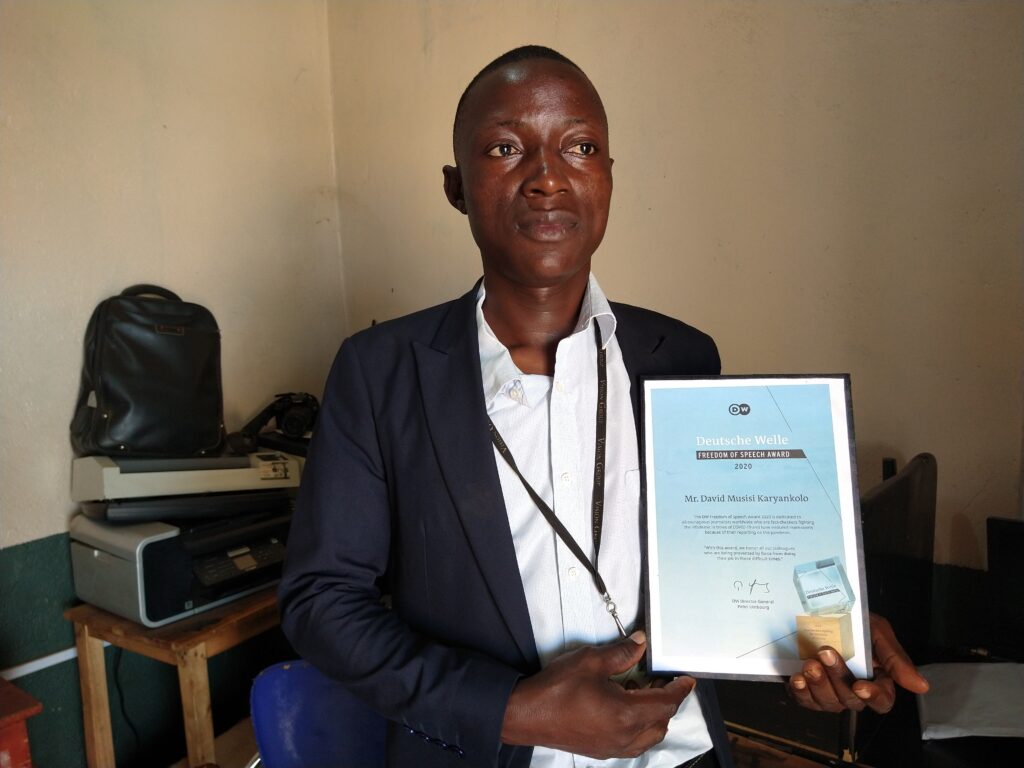 David Musisi Kalyankolo is a happy man after receiving the freedom of speech award from the German based DW tv.

Last year a Uganda police officer and OC Buziranjovu police post severely beat Kalyankolo while at his home in early April, leaving him in a coma for ten hours.

David Musisi Kalyankolo, a television journalist with Uganda’s Bukedde TV, is among the 17 journalists from 14 countries who DW recognized for their outstanding courage taken while reporting during the coronavirus pandemic.

They represent all journalists worldwide who have disappeared or been arrested or threatened because they reported on the COVID-19 pandemic.

Iam feeling proud and happy after being recognized by an international TV, and brings more courage to me to work hard.

Kalyankolo revealed to this website the pain he went through after the attack by the policeman.

“I was hit with a baton by the OC Buziranjovu Noah Mukose while I was at my rented home in Namaiba village in Nakisunga sub county in Mukono, I only gained my consciousness after two days at Herona Hospital in Kisoga”. Said Kalyankolo.

“This award means a lot to me. I was assaulted, up to now I still feel the pain most especially when I work in the sunny days, but I have continued with my work,” he said.

“I treasure my job, and I find my job very important. All journalists out there should not take this profession for granted. If you choose to work, do exactly that. God will reward you.”

The community news reporter appealed to the Uganda police force commanders to act like professionals by deploying professional officers in operations” Kalyankolo said.

DW Director General Limbourg: ‘Press freedom is in danger around the globe’

Journalists from Uganda and Zimbabwe are among the recipients of the DW Freedom of Speech Award in recognition of the sacrifices they made while reporting during the coronavirus pandemic.
Attachments area