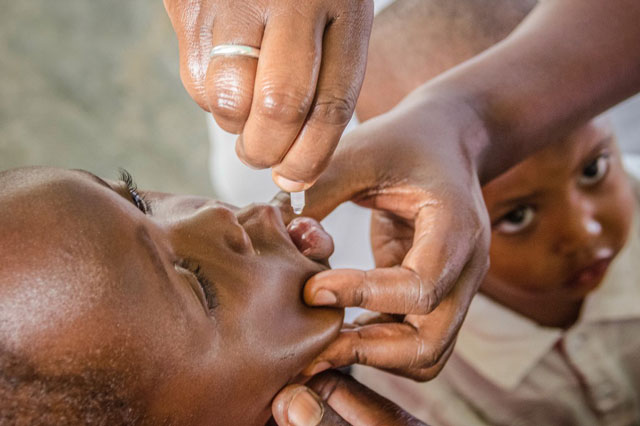 The Ministry of Health will next month conduct a second polio immunization campaign across the country targeting an estimated 8 million children below five years of age.
The first national immunization campaign, carried out in January was recommended by the Ministry after a polio variant virus, was detected from fecal matter samples collected from Kampala.
The Ministry of Health warned that it was the rare wild poliovirus type 2, whose vaccine was withdrawn from the country’s routine immunization exercises in 2016.
Dr. Daniel Kyabayinze, Director of Public Health, notes that the second phase is intended to supplement the first campaign. He also added that the second mass vaccination is critical given the fact that there has been a confirmed outbreak of wild polio in Malawi.
Kyabayinze was on Saturday speaking during a World Polio Day pre-event organized by Rotary Uganda to show commitment and fundraise money towards the global polio campaign as the world fights to eradicate this deadly disease from the face of the earth.
In March, countries in Eastern and Southern Africa were advised to lookout out for polio and conduct mass vaccination campaigns after an outbreak was confirmed in Malawi.
Dr. Charles Olaro, the Director of Clinical Services in the Ministry of Health, notes that although Uganda was certified polio-free back in 2006 by the World Health Organization, any case detected anywhere raises a red flag as polio is extremely contagious and can spread easily as people move across borders.
People contract polio when they drink water that is contaminated with the fecal matter of someone who carries the virus. Children under the age of five and those living in areas with poor sanitation are most at risk. Currently, there is no cure for polio but the vaccine protects children for life.
Paralysis is the most severe symptom associated with polio because it can lead to permanent disability and death. Between 2 and 10 out of 100 people who have paralysis from poliovirus infection die, because the virus affects the muscles that help them breathe.
The effort to eradicate polio internationally is spearheaded by the Global Polio Eradication Initiative, a public-private partnership led by national governments with five partners: WHO, Rotary International, the US Centers for Disease Control and Prevention, UNICEF, and the Bill & Melinda Gates Foundation.
Mike Kennedy Sebalu, the Rotary District Governor, said the 200 rotary clubs in Uganda have pledged to donate at least USD 80,000 (approximately 300 million shillings) to the worldwide effort to combat the deadly disease.
According to Sebalu, the money will be put in a pool to meet the Rotary International pledge of USD 150 million to support research, the creation of surveillance systems to find any polio vaccinations and the development of vaccines.
Meanwhile, polio researchers at Makerere School of Public Health are also using the opportunity to collect information on how digital payment of health workers involved in such activities can bring success to the program.
Juliet Aweko, a senior research coordinator, said that many previous health campaigns have been ineffective due to how the remunerations of health workers are managed.
Aweko added that their study will assist in determining how and under what conditions digital health worker’s payments may support the successful execution of campaigns.