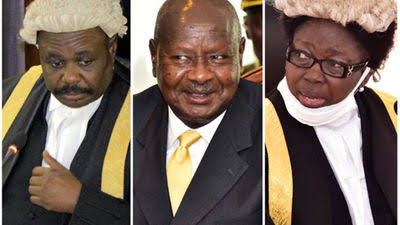 Members of Parliament have already converged at parliament as they wait for the buses to carry them to Kololo airstrip, where the voting process will take place.

Voting starts at 10.am in the special parliament seating and voting will be presided over by Uganda’s chief justice Alfonso Owiny Dollo.

Later, the elected speaker will preside over the voting process of the deputy speaker.

Meanwhile Kadaga, while speaking to the press yesterday at Africana Hotel in Kampala, confirmed that she will be on the ballot as an independent.

“I was not given the opportunity to present myself in CEC. I have been a fighter of women’s rights and the ordinary people reason I was pushed out,” Kadaga revealed.

Rebecca Kadaga has appealed to the ordinary people to ask their MPs to vote for her today as Speaker of Parliament, Kadaga defied NRM’s CEC and opted to stand as independent.

“As you may be aware, my party (NRM) did not endorse me for the Speakership race. I will contest for Speaker as Independent. There have been many attempts to eject me from the NRM party. I am therefore standing,” she added.

Rebecca Kadaga, Jacob Oulanyah, FDC’s Ibrahim Ssemujju are among the people in the speakership race, On the other hand Anita Amongi, Mohamed Nsereko and others for deputy speaker.

Oulanyah has served as Kadaga’s deputy for the last ten year since 2011. President Museveni is expected to attend the session as chief guest.