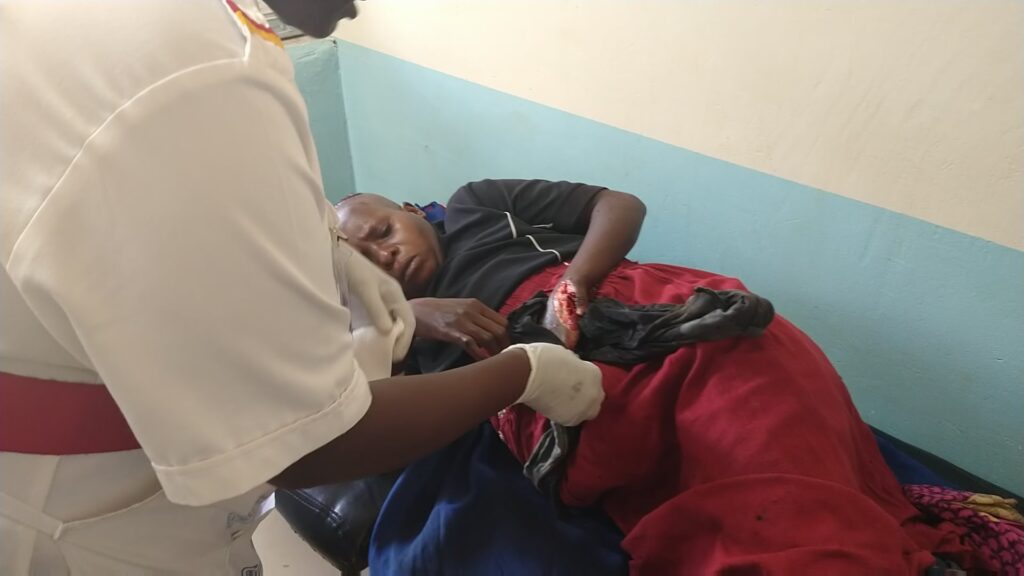 Mpata police post in Mukono District have detained an enraged Robinah Nakaye accused of cutting off the hand of Robinah Nakaye’s hand the side dish to her Husband Ronald Mukyana.

The incident occurred on Saturday midnight when Ronald Mukyana and Ndilimaana Jackline were allegedly attacked with a panga and cut Jackline several times accusing her for having an affair with her husband.

In the scuffle Ndilimaana was cut in the head, chest, leg and her hand was chopped off while the man sustained injuries but managed to escape to an unknown place.

The victim’s (Ndilimaana) husband is currently in police custody on charges of threatening violence against her mother, and this prompted Mukyana to utilise the chance to fall in love.

The furious woman was said to be extremely distressed when she learnt that her husband had an affair with Jackline who is four months pregnant.

Nakaye while at Police said that she didn’t intend to cut them but she was driven by anger.

The Ssozi Village residents narrated to us that the victim is five months pregnant, her husband was arrested last month after threatening to kill her mother. “It’s really a shame to a man how can he love a prisoner’s wife who is pregnant?” Asked residents.

Hassan Magulu the defense secretary Ssozi village, narrated to us that the suspect for several times suspected her husband, to be in love with the victim, untill yesterday night when she caught them in the act of having sex.

“After hearing the alarm we responded by rushing the badly injured woman to Herona hospital Kisoga. Meanwhile we got a suspect hiding in her neighbor’s house, “the defense secretary said.

The residents urged members of Parliament to amend the laws on adultery, “the lawmakers should phase out to the six hundred shillings fine, there should be stringent measures on people caught in adulterous acts.” Said residents.

Rogers Kabugo the LC 1 vice chairperson Ssozi village condemned the and advised his residents to always seek solution to the village authorities.

Dr. Robert Kizito of Herona hospital said that they are working around the clock to ensure that the patient recovers, because she lost a lot of blood due to the multiple cuts on her body.

“She is four months pregnant so she needs a lot of blood to support her and the baby.” Kizito said.

Police said the suspect who is currently detained  will be charged with murder after investigations are complete.