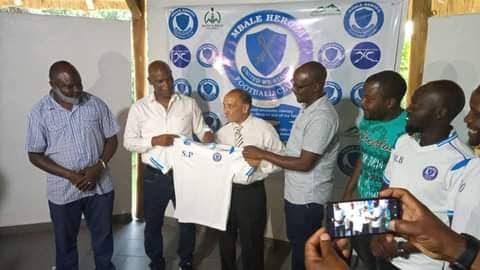 Steven Pritchard and Bobic Odowa were Officially Unveiled as the club’s technical staff ahead of next season in the Star times FUFA Big League .Head coach and assistant respectively.

The newly elected Head coach for Mbale based  FUFA Big League side Kiboga Young/ Mbale Heroes FC, has set a target of  qualifying  to Uganda Premier League- UPL in the 2020-2021 season.

While speaking at his unvielling this afternoon at Mt. Elgon Hotel, the CAF C licensed  scottish coach who   joined  on a one year contract, revealed that his is optimistic of guiding Mbale Heroes to UPL.

“I am here for one reason, to take Mbale Heroes to Super League (Uganda Premier League) and we maintain it there.  When I came to Uganda on 2007, Mbale Heroes was among the best teams in Uganda along with Express and SC Villa” – said  Steven Pritchard after the unvielling

“My target is to promote this team  UPL, this region deserves a team in top flight league, We need  to make the wonderful  fans of this region proud by achieving it. I and Bobic  (his assistant) have made plans of  to making Mbale Heroes the best in the country like it was before” – Pritchard added.

Former Mbale Heroes and Express FC  player Bobic Odowa, was unvielled as Pritchard’s assistant, said  he is happy to be back at the club where he started his football carear and expresses his readiness to  work with Pritchard to secure the team’s promotion to UPL.

“I am happy to be back at the club where I started my football from. I know the demands of  fans of this area because of played from here. I am going work with the ‘Mzungu’ to guide the team to UPL” said Bobic Odowa