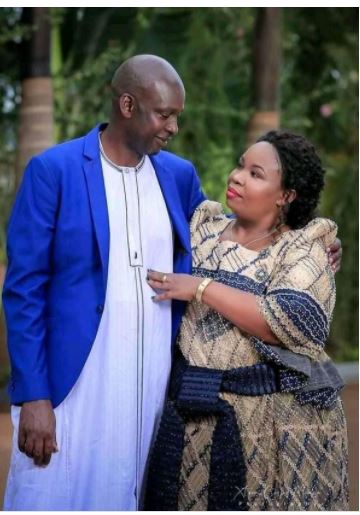 Popular traditional herbalist Sofia Namutebi aka Mama Fina over the weekend secretly introduced a man she snatched from a journalist working with the Vision Group.

Our snoops reveals that Mama Fina secretly introduced her new lover identified as Swaleh Kimera And the two were traditionally united as man and wife at the ceremony locally known as Kwanjula.

However, the ceremony was so secretive according to our snoops, because the lovebirds feared that some elements that do not wish them good would disrupt the function.

Mama Fina hooked up Kimera in 2018 after reportedly snatching him from his other baby mama identified as Yudaya Namyalo, who reportedly works with the Vision Group.

A bitter exchange ensued between Mama Fina and Namyalo after she had snatched Kimera. But she later came out publicly and stated that she had met the man long before he had hooked up with Kimera and that he belonged to her alone.

Kimera who returned to Uganda recently works in Sweden, where he lives with two of his children.

However, we have learnt that in order to secure a legal wedding, Mama Fina has since adopted the name ‘Sylvia’  while Swaleh christened himself Fred, such that they could arrange a Christian marriage, since they both did not officially divorce the partners they had married when they were still Muslims.

Our reporter was reliably told that the Muslim fraternity refused to wed them on grounds that Mama Fina had crashed several marriages and relationships which if the Muslim faith wedded her again would lose respect.

It should be noted that prior to hooking up Kimera, Mama Fina was married to Hajji Ismail Ssegujja, whom she later unceremoniously dumped.

But she  had  earlier on been widowed following the death of her former husband Maj. Muhammad Kiggundu, who was gunned down with his driver Sgt. Steven Mukasa in 2016.